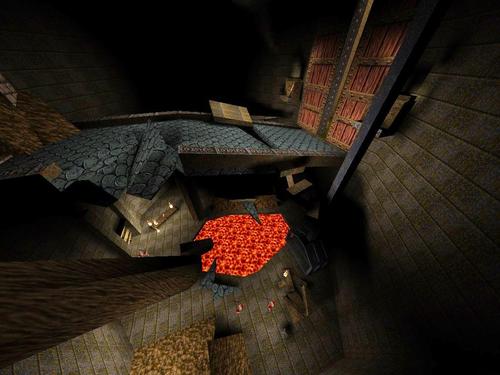 Sir Mayard and the Mountain

These two maps have some nice touches but the negative aspects outweigh. The author tried to add some atmosphere by putting triggered messages into the level, unfortunately those are displayed too briefly. On the brushwork-side and technically only average. Monsters are more annoying than entertaining.


lahuel 24 March 2010, 23:09
groso
bastante copado
Fr3n Registered 5 December 2012, 6:21
The "ruined" bits are surprisingly well done... too bad the rest of the unit is blocky and uninspired. The text-adventure style comments are a clever idea ("the blood on the ceiling has begun to drip on you" - lol) that definitely could have worked, but like the description says, it's impossible to read them.
dBAudio Registered 4 October 2014, 21:49

logging centerprint helps, but it still takes away from the map having to read them in the console.

In terms of brushwork, it's an extremely detailed package for the time, so I can understand why it took the author days to vis the maps. All the debris and broken architecture convey decay and age. Too bad the geometry ended up rather glitched.

It was a pretty cool idea to add story messages along the trail, but the execution fell a little short. There were a lot of multi-line passages visible for only 2 seconds at a time, so I had to go to the console to read them. All this kept interrupting the other gameplay. The poor execution may just take away more from the experience than bring to it.

Speaking of other gameplay, the combat is pretty challenging and fun, but I think relies a bit too much on sudden ambushes in the player's face.

There were some other things that pushed me the wrong way, like a wind tunnel, where I got stuck, so I had to resort to noclipping, and the final encounter was so weird that it felt like a glitch, but I guess it was supposed to be like that after all.

My review so far makes these maps seem pretty bad, but I think it's an interesting package worthy of a playthrough, if you're into early Quake maps. My favourite part was this one cool unique "monster", which alone just might justify playing this map pack.

I agree with the criticisms others have made regarding disappearing messages and sticky architecture, but I still really enjoyed this release. Compared to other custom maps from early 1997, these maps are phenomenally creative, detailed, and atmospheric. The author seems to have had a unique artistic vision, which I think makes up for the somewhat choppy gameplay.