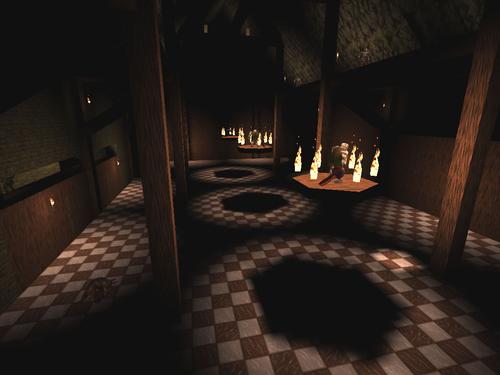 the floating ogre platforms were interesting. how does one get up there? i had to cheat.

Mayhem on The Quake Grave

I thought this map started out great, in reference to its name. A very Mayhem filled beginning, with lots of enemies... but then (like dbAudio above) I couldn't find my way to the next area without clipping through the level. I don't know if anyone else found out what you're supposed to do to get up to those areas above the circular ogre platforms, but I couldn't figure it out. I felt like this could've been a crazily slapped together yet fun map, but the secretive or nonexistent nature of progress to continue really ruined it.

Hi ArrrCee! It turns out that there are a trigger_push at the wooden pillar at the front and right side of the screenshot. (The one the nearest ogre looks at!) You have to jump to get to it and it goes up to the rocket launcher. it's rather difficult to land on the wooden beams above, but it can be done. You can play through the map but it is still poor!!

Thanks Hrimfaxi! I'm going to have to look into this when I get home later. That is incredibly weird and random! How would anyone know to do that?

Quite a frustrating map. On my first run I ended up searching aimlessly for some sort of switch downstairs for about 10-15 minutes, until I finally succumbed to the grenade shower from above.

Then I ended up using the fly cheat, when I accidentally stumbled upon the push trigger. It was only later that I realized that the push trigger was marked by a bright patch on the floor, as seen on the screenshot.

If only it had been conveyed a little bit better I would have just maybe considered rating the map even a 3/5. It has some tight combat and those chandeliers are kind of cool. But as it stands, I'll give it a 2/5.