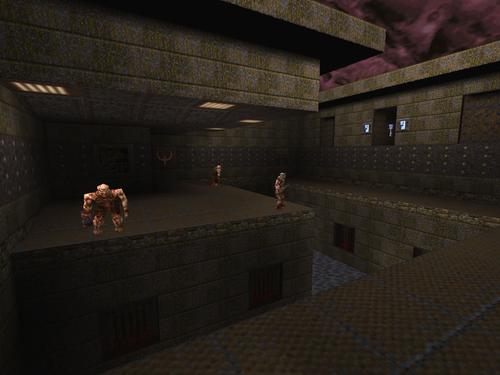 
Spirit 28 April 2012, 17:25
mymap has some really annoying monster placement and it is also very hard with traps.

What is the difference of this garrison.bsp to garrison?
AAS Registered 18 November 2015, 12:21

It is the same garrison.bsp, Spirit, same file and same size. In fact, playing garrison without mymap is going to give a frustrating experience, as the weapons needed in garrison have to be adquired in mymap.

About the maps: they are very simialr between each other, being probably better done in terms of combats mymap and with some traps.

Brushwork is cubish but effective and around in details like iD maps, layout is 2D and mainly tree shaped with many keys to find, lighting is well done while a bit dull sometimes, making some silver keys harder to see, and hiding too much in complete darkness sometimes, combats are mainly straigtforward with many close ambushes, the difficulty varies a lot from combats where the eneimes don't reach to some unfair ones but overall around iD maps or higher, ammo and health is a bit above iD maps in quantity and armour a bit less and well placed across the map for most of the time, secrets are well placed and of known mechanics.

The maps play quite well, with some tough or even unfair ambushes but nothing infuriating. Some of the traps could get a bit of polishment as they need precise controls.

Anyone got rift.bsp lying around?

I gave this one a 4 point rating. The architecture isn't pretty, but the gameplay is pretty good.