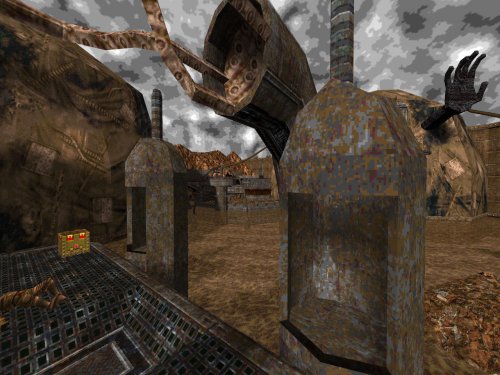 Two large abstract base levels, "a lengthy journey through a non-linear H.R. Giger-themed flooded scrapyard". The map sources are included.

Note: These maps require an engine port with increased limits and expanded map boundaries. Currently, only RMQ (included) and Quakespasm (version 0.92.0 or later; set "sv_protocol" to "999") are capable of running them.

The maps can only be played on either Easy or Hard skill setting.

4/5 with 30 ratings
You can NOT add ratings
if you are not logged in.

Bundles a windows copy of the RMQ engine which is kind of annoying, but looks promising!

Seriously, Quakespasm can't run these maps? What are they doing that's so very special that QS can't cope?

oms32.bsp has entities and a playable area outside of +-4096 units which exceeds the limits of the Fitzquake protocol (svprotocol 666).

This is the first released q1sp to do so, AFAIK, which is why the engine choice is limited.

Note that protocol 999 is only available in a special build of QS that I prepared for those having trouble running this map in RMQ: here And you do have to set "sv_protocol 999" in the console with that build.

Instead of a "patched build" can we have a patched source code so we might even be able to use it?

Lensjocky: the first map should run with the latest official QS release -http://quakespasm.sourceforge.net/download.htm . The second map would need the "patched build", I can make a Mac build of it if you want.

I would love a "patched build" of QuakeSpasm for the Mac if you're willing to compile it for me. I'm dying for a new map.. Thanks in advance ezze.

Lensjocky: here is a package with the mac+windows builds and source, I hope it works for you! http://quaketastic.com/files/tools/windows/engines/quakespasm-oms3.zip

Thanks a lot for the Mac build! I actually have BootCamp, but I do most of my Quakery on the Mac side.

Thanks for the Mac build as well ericw. taking it for a spin right now..

The level design is really quite unlike anything else. ORL nails the Giger elements to a T, the uneasiness, the savageness and brutality, the atmosphere and visual themes.

On the other hand, I wasn't always fond of the gameplay itself, a bit too unfair and claustrophobic at times. Still well worth it.

Do we know whether the next official build of QuakeSpasm is likely to support both these maps? (If so, I will wait for it.)

anon, make sure you entered "svprotocol 999" in the console with my Quakespasm-oms3 build. If you teleported into the void partway through oms32, that is the problem. Sorry, I should have enabled that setting by default for this engine build :-/

Damn markdown, that should read sv_protocol 999

Woah, that fixed it right up!! thanks!

Honestly I got more of a Lovecraft vibe from these maps than a Giger one, outside of a few textures. While I grew up with both Quake and Lovecraft, I never felt that Quake's worlds were really all that like how I imagined Lovecraft's alien worlds when I read his stories. This map is the closest I've seen to one that actually captures my mental image.

The combat is really tight. The second map was my favorite. Many areas give room to maneuver by jumping between walkways and platforms, but there's always the risk of falling (which isn't always deadly). Since there's usually very little room to run about I imagine the combat won't be everyone's cup of tea, but I found it fresh, pretty tough but well-judged (on skill 2). The sense of progression is pretty impressive throughout. I loved thr fight back through the raised platforms after getting the silver key, and the descent underground was incredible. Unfortunately the maps suffer from a few bad cases of wonky geometry but it's not enough for me to lower my rating when the theme is so special.

The latest official version of Quakespasm (0.92.0 -- which was released today) supports both of these maps.

Played on hard difficulty, it is brutally hard, and the maps are chaotic already both in gameplay and in theme. The areas are pretty wide and open,seeming empty first before a huge bunch of enemies teleport on your ass. The theme is really unique and changing, sometimes horrific, sometimes weird. Play it for a very unconvential and unique experience.

I hereby confirm that this works with the latest build of QuakeSpasm (0.92.0 x64) from beginning to the end. Be sure to switch to protocol 999 by typing sv_protocol 999 in the console though - otherwise the second map glitches in the second half. As a side note, I played up until that point in protocol 666, when it glitched, switched to 999 and reloaded a quicksave: worked without a problem after that. So, no worries if you forget to switch it to 999 before starting your playthrough.

oms3 seems to be all about fighting spawning waves of enemies whenever you move forward, push a switch or do something as ordinary as grabbing a health pack. If you're happy with that, then this is for you, but I'll pass.

No idea why I initially gave this a 3. The ambition in this map is astounding. Extremely original and the surprise after hitting all buttons really "rises" to the occasion. That moment is seriously one of the most memorable I have had in my custom quake map adventures.

The 5 star rating eludes these maps due to somewhat frustrating monster placement and geometry/player relationship issues. Still, absolutely recommend a play through to experience the world ORL has constructed here.

These maps tank my performance, even on a modern system. Even with no FSAA or anything it still produces some input lag, which affects my aim. Quake's BSP format isn't suited for very large open areas. If you can see pretty much the whole map at once, it can not be optimized, since Quake has no level-of-detail and/or distant terrain system. So all it can do is just render everything at once, as is. So personally I don't really see much point in making the "spacious for the same of being spacious" Quake maps, but that's Orl for you.

Anyway, with that out of the way, skill 1 (normal) is strangely not available, so I played on skill 0. Managed to beat the maps on my first try, although some traps were really nasty and left me with little health. In particular, in the fist map there's a situation where you're riding a caged elevator down and suddenly there's an ogre lobbing grenades inside your ride. Left me with 6 health, god damn it.

The brushwork mostly consists of small platforms and slippery catwalks, where you have to awkwardly strafe and try to dodge the enemy attacks. Got stuck on some scenery a couple of times, but still managed to persevere, since at least on skill 0 the resources are plentiful, I even left a couple of armors and a QD behind. Just don't fall to your death or catch too many grenades, I guess.

Still, just like with Ter Shibboleth I wouldn't really recommend these maps, the gameplay is not very fun, the whole thing is more of an experiment in pushing the Quake engine to its limits and making it do what it isn't supposed to.

Finally made a serious attempt at these maps, having got lost in one of them back in the day and lost interest. This time, I persevered through what was often tedious hard work till I reached (what I assume is) the climax, with the Shub hanging from the ceiling and all the bouncing vores and shamblers. Screw that. Even with god-mode and notarget, I couldn't survive long enough to figure out what to do. In the end up I threw up my hands and walked away. "This is meant to be fun", I reminded myself, and went off to replay some of the AD maps.

As a tech demo, this is pretty good. But as a gaming experience, I found it almost no fun at all. Strange, since ORL's Conflagrant Rodent is one of my very favourite maps.

Damn! I really cannot praise the level design and the general look of this highly enough. As commented by Bloughsburgh, the part that "rises" to the occasion is magnificent. Definitely a Wow! moment.

The combat. I just didn't like it... i mean, at all. Up until the final part it's like 90% spawn ambush, which in a map this long gets very old, very quickly.

I was going to rate it a 3, but the design and look is so good I bumped it to 4. With decent combat/monster placement, it would've been a 5.

Does anyone know how to survive the final encounter with all those bouncing shamblers and vores?