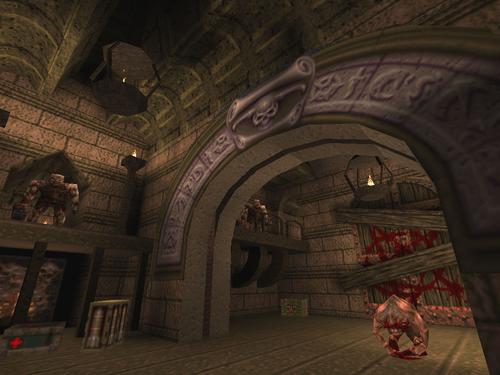 SP episode with 8 medium sized Medieval/ Metal maps with some Base bits and a few custom textures (including start and secret level). OK, despite 'oldschool' construction with awkward brushwork in places.

Very nice release with a good old school style. I've enjoyed it both on vanilla (with Quakespasm) and Darkplaces (using the awesome small mod compilation by Seven)

Very nice set of maps, but the last two are insane. I had to use impulse 9 for the end of orlmap8, trying to finish off the last vore with an axe was as hopeless as it sounds, and god mode for the last map because my patience ran out.

Best sp episode ever.Its hard as hell on nightmare, last map "final showdown" is the most craziest ever thats existed,its total mayhem, but after a few vodkas i did it without cheating, the whole episode is gut wrenching.

Okay, so here's a strategy for easily (with respect to its inherent difficulty) finishing the end level [SPOILER]:

Use the well to up you health and armor, then perform a rocket jump to level 1 without taking the rune. Kill all the monsters that teleport. You trigger them by walking around. Then take the rune and deal with Chthon. The idea is to deal with Chthon and the monsters separately.

You can lower the electrodes before taking the rune, thus limiting your time in exposure to Chthon's attacks;

There's a secret on level 1 that leads to a pent.