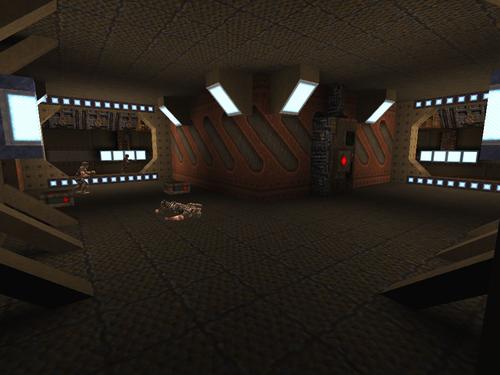 the first map was quite linear, i thought. the second had some choice as to which way to go. i did like the modified monsters.

Enjoyed this pack a lot.

Clearly inspired by hip1m1 from SoA, both maps of this pack have an interconnected layout with long paths, choice of path to take to some extent, and some side areas, but almost always in a 2D layout. Brushwork is good for its time. Doesn't provide skill settings, but its difficulty is around ID's skill 1. Overloaded in ammo if the player doesn't gib the enemies, but lower amount than ID maps. Even though the placement is repetitive in a 2D corridor layout, the combats aren't repetitive because of boxes use and choice of enemies. Secrets were fun to find and with adequate rewards.

If this had a 3D layout and better placement of enemies it would be a solid 5 for its time. As it is 4+.

Not much to add to Cocerello's review. A solid fun map pack with great brushwork for the time. I also think the map should be rated around 4 or 4,25. Since the average rating of the map is well below that at the time of writing this review, I'll have my 4,25 round up to 5/5.

P.S. I clearly underestimated the difficulty of these maps. Since I was dealing with base monsters, I was subconsciously not expecting them to be that much of a challenge. So I was playing rather sloppily, and before I knew it I was already below 10 health, still with no armor and health pickups in sight. This game's kinda stingy on resources, I thought, as I went into try hard mode. It was kinda cool to be on edge and heavily dependent on enemy ammo drops, though.

Then, the game lulled me into another false sense of security, as I was supplied with red armor, health and ammo right off the bat in the second map. The sloppiness returned, as I felt invincible in my red armor, and before I knew it, I was at the same situation as in the first map. The enemies are really heavy hitters, I can't overstate that, so if you haven't played this yet, you have been warned!