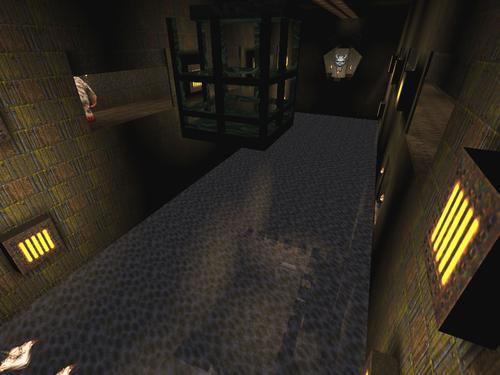 Medium sized Wizard/Metal map with a cage ride, an underwater ruin and a few tricks'n'traps.

What Spirit said - slow and steady :)

The architecture is interesting and varied, which gave me the drive to see what's in store in the next room. I also liked how parts of the map are intertwined with one another, like the starting room with the corridor below.

The combat encounters vary quite nicely, as well. But as stated previously, a careful playstyle is generally better suited for this map, even to a fault at one point, when a bunch of fiends couldn't make past a fairly wide door to chase me, so I could just shoot them safely from a few steps' distance.

I was wondering whether the cage combat part was good, because you're being fired at from all directions, which got a bit aggravating, but in the end, I generally liked it. It wasn't too long and it was suitably challenging.

I was in a patient mindset while playing and was prepared to die a few of times, so these couple of somewhat cheap deaths that I had didn't bother me much. But at other times I might want to rage quit the map because of those exact quirks. xD

average quake map from 1996 with good combat and varied architecture. I enjoyed the cage ride implemented in the map as it made the map more challenging and exciting. Overall good first map from the level designer and i would give this map a three out of five rating and recommend playing this map.