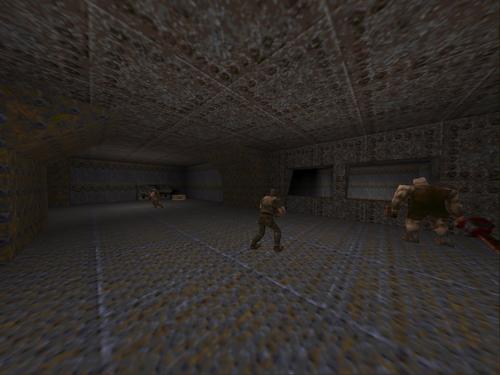 The level actually looks fine considering its release date, but plays very poorly. There is far too much ammunition (especially rockets), it is often difficult to figure out what to do next, and the exit is missing.

Played on skill 2. All life ended and i think all secrets found, as there isn't numbered ones.

Ok in architecture and bruhswork for its time, the layout is half the time mainl linea and the other gets the player to explore with some big side areas, combats are all straightforward, ammo is over iD maps but nothing outrageous, as i ended with full on shells and nails and 43 rockets and only one pack of shells and nails to take after finding all the secrets, the secrets range from tpical iD to a bit obscure. Unfortunately there is o exit.

The map is OK for its time, even more considering it was done in a single week. As usual it can become a bit frustrating if one doesn't know there is no exit but for the rest is an straightforward slaughter with some parts for exploration.

There is not much flaws, aside from that its not conveyed to be a map for exploration as from what i read the mapper maps mainly for DM, the sounds of a message with no message that happen often, and the repeated weapons in plain sight. that i suppose that are inteded for DM and forgot to check the spawnflags.

This would be a completely adequate single player map, if only there was an exit and there'd be some direction given for the player. But as it stands, I ended up spending most of my time trying to figure out how to open a floodgate through an obscure button, which was quite frustrating.

The brushwork is quite detailed and the rooms are interconnected in a nice way making the map interesting enough to explore. The combat isn't half bad either, even though ammo and weaponry are quite generously on offer.

I actually enjoyed the layout and didn't find it confusing. The textures are bland and repetitive, though. If this had been finished, it would have been one of the better maps of its time.