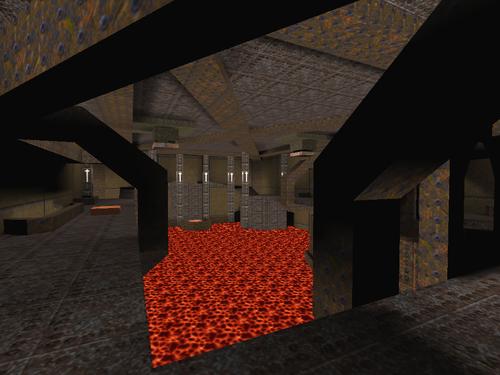 3/5 with 16 ratings
You can NOT add ratings
if you are not logged in.

Pyro4 on The Quake Grave

Pyro 4 continues to show Dean progressing as a mapper and this is his best yet. It's unfortunate it's his last Q1 single player map. But where is Pyro3? Was it a DM map by chance?

This map is even bigger feeling than his other 2, the theme is more cohesive and the rooms vary it up a bit. The enemy placement is a bit better than the previous Pyro maps but there still could've been more I think. Overall I think this is Dean's best single player quake map and I found it to be pretty fun! Would've liked to see what he could do in Quake after this one.

Huge in scale, decent and fun combats half the time, the other the enemies (knights) take long to reach the player, and only one enemy badly placed, Chthon, who most of the time his projectiles will be intercepted by the floor. Difficulty below Id maps except on the first fourth of the map and below Id maps in quantity of ammo.

There seems to be some side secret areas like in pyro2, but this time couldn't find the way to them.

This is a very primitive level. Simple architecture, lazily done lighting. The gameplay interest is zero.

I would recommend to avoid playing it.

The textures are plain, and the progression is linear, but overall I found this map quite fun. The only glaring drawback is the monster placement in the first open-air room--picking off the shambler in hard/nightmare is time-consuming without being much of a challenge.

This is the best map in the pyro series in terms of level design and combat. Although i feel the level is too open as it makes combating the enemies within the map very easy. Overall, I would say it is worth a download and give it a three out of five rating.

It's a rather average map with averagely (is that even a word) fun gameplay. It also has a few cool ideas in it. I liked this one mass ogre encounter that required a little bit of situational awareness and the pathway to the golden runekey was also quite atmospheric.

The map also had a couple of misfires as well, such as unmarked secrets and some poor enemy and powerup placements. And at times the map looks overtly simple. Still, I'd say it's fun enough for a playthrough.

I played this twice, once in normal (by accident) and again on hard. Normal was trivial. It had an oversight where a secret door opens if you kill a Death Knight that only spawns in hard mode. You can still get to that area by rocket jumping. Hard was very hard in an unfun way at the very beginning and there isn't enough ammo on the map. The differences between hard and normal quickly taper off after the first three fights, the difficulties being seemingly identical in the last two thirds of the map. It's a very old map and one of Dean Scott's first, supposedly. It's also his last known map. It's not worth criticizing in depth because the map doesn't surprise you. It is what you would expect it to be when you see Pyro2. Much the same as Pyro2, its the readme that is the most interesting thing about the past. We get a great glimpse into the mind of a man who must now be almost 25 years older... and this one is a doozy. Here are some choice bits, and I do believe these bits are even better than what was found in the Pyro2 readme:

"The name of the map "The Awakening" has a dual meaning, first I used new and more complex entities than I did in other maps and secondly, my baby girl "Lilly Renae" was born dureing the time I was makeing this map (Proud daddy plug there ) :)"

This is my favorite part. Major "awww" factor, here. I also appreciate the next part, his cheeky credits section:

"Additional Credits to : ID Software, for Quake QBSP Win32 console-mode binaries. Quest v0.92 (Excellant Editor) Microsoft edit program Pepsicola Corp for the Mt. Dew IPL for the electricity Intel for the Pentium Chip My co-workers for politely nodding their heads when I would explain to them my Quake building"

It took him almost 2 months to put the map together, says he. Quite an accomplishment, given the two full time jobs of his work and his new daughter.

The final part of the readme, his legal section, is almost even better than his last one for blasting away at Actura Software:

"* Legal Stuff * You may distribute and modify this level, as long as you include my text file and give me credit. If you plan on distributing this map on a CD Collection you MUST contact me first for my approval and a complimentary copy of the CD would be nice too :) . The exception still holds true for Actura software that anyone associated with Actura Software may not do anything at all with this level. (Gee what happened to that company....are they now selling software for Commodore 64's) "

He did put a lot of effort into this map, as amateur as it appears and as simple as it plays. I say the best part of the map (besides this readme) is the architecture. Considering his experience and the fact that this was clearly just a fun little side hobby to him, I consider this a really good effort.