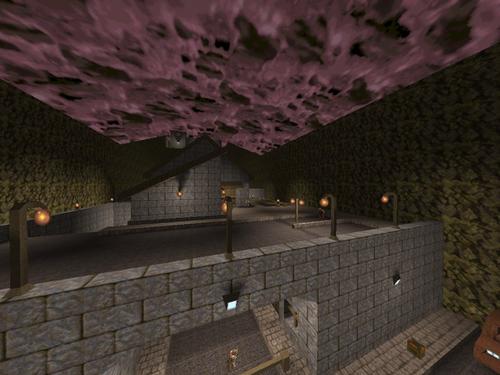 A imaginative but simple fortress. Features a (long and slow) ride on a cable car.

2.4/5 with 9 ratings
You can NOT add ratings
if you are not logged in.

The setting here is a modern (as opposed to medieval) fortification, which is something one does not see that often in Quake maps (to the best of my knowledge). It starts off in a driveway/parking area with details such as a boom gate, street lights and a car, which you evidently used to reach this place. Said car is halfway stuck in a rockface, though, which is (unintentionally?) funny. The fort in the distance looks appropriately foreboding, the cable car ride is interesting (but very slow), and once you get to the fort itself, there are plenty of rooms and interconnected passages to explore in a non-linear fashion. The map's single secret is also very clever.

Sadly, though, while the setting is nice and interesting, there is just very little happening here. Monsters are very few and far between, and despite its promising start, the map does not tell much of a story. The variety of rooms in the fort is nice, but there is too little of interest inside them (as an aside, many of the doors are shootable, but visually identical to non-shootable doors – which in my opinion is not a very good design choice). The ending is decidedly underwhelming.

In short: like qktower and qkdme1m1, this is not bad as such, but feels like a prototype map, the full potential of which was never reached.

This doesn't feel like a playable level, but a foundation to make a playable level on top of. It needs about four times as many monsters, literally. Otherwise, it's not too bad, apart from the sloooow cable-car ride. But such a missed opportunity.

Quite decent for its time. Leaving aside the typical cramped places and some issues like shootable doors, its fun and if the track used were other, atmospheric, due to the fact also that while infiltrating the fortress the numbers are less but the begin to swarm the player the more he gets into it. It reminds a lot of RTcW maps.