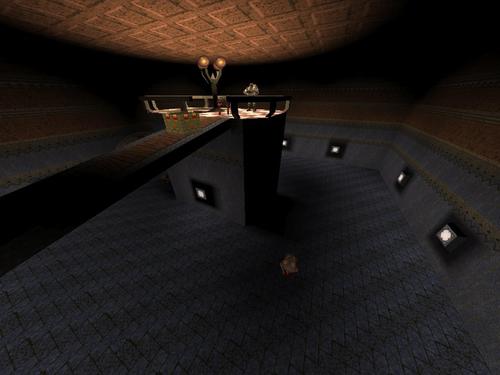 2.1/5 with 9 ratings
You can NOT add ratings
if you are not logged in.

Pretty much what I've come to expect from DAV's qk* maps, which all seem very prototype-like (at least the ones I've played so far): rather bland, but with some nice ideas. The layout/progression here is particularly interesting, even if the overall experience is lacking.

The map has a visual language issue similar to that in qkfort, with shootable buttons that resemble (what Quake players know as) pressable buttons. At least in this case the map is consistent (as opposed to qkfort), so once you figure out that you need to shoot and not press the buttons, the problem is solved (even if it is still a little visually jarring).

Overall, worth a look as long as you do not expect a well-rounded map.

Spirit/negke, regarding the editor's description:

1) If I may be so pedantic, the word is "cramped" (i.e. crowded/confined/narrow; "crampy" means characterised by e.g. muscle cramps).

2) What are evil staircases?