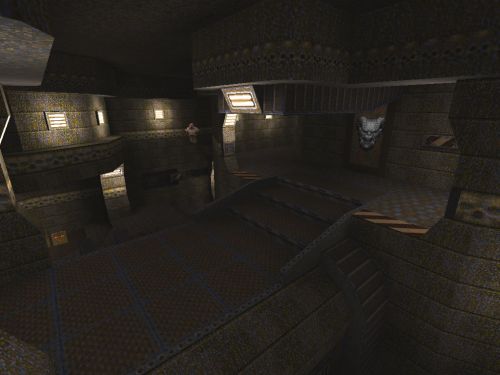 Medium-sized dark runic metal/base style biomatter processing facility. A sort of prequel to the Travail missionpack (which is required to play).

I don't know how I missed this one -- a really superb base map, with lots of exploration, some nice surprises, and an intriguing progression. Highly recommended, and well worth four stars even now, six years after it came out.

Agreed. Hellish atmosphere with lots of flesh and blood (even a semi-hidden gigantic fetus (!!!)), and some really well-constructed machinery. The custom base textures blend well with id's metal textures. Quite a unique look.

A great looking map with generally well-flowing layout and gameplay. I would say that it was a tad dark, especially underwater (underblood?), and I have to admit that I did get lost at a few stages.

I always figured out how to progress though, and for the most part I enjoyed the combat. Some of the new enemies are real ammo sponges though, which makes them rather uninteresting to fight as their attacks are generally non-threatening. Overall, a good map.

I agree it's just too hard to see while swimming in blood... :D I'll admit here that I cheated to figure out how to get through it. Still, great base level!