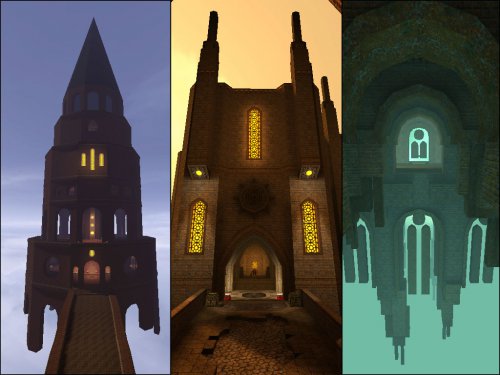 I liked sock's map the most. Really atmospheric with the fog matching the skybox.

Ultimately I also think sock's is the most successful overall, although I found the ending a little unexpectedly sudden (I hesitate to say "anticlimactic", as I don't wish to suggest that I would have preferred an insane horde or boss battle). The secrets were fun to find, albeit a little frustrating at times (since a single misstep would send you flying off into the void). It felt very much like a medieval counterpart to Metal Monstrosity.

Visually, though, I liked Skacky's the most, in particular that gear-like wall decoration and the broken paving. I also liked the inclusion of the wind tunnels. It felt really massive, but ended even more suddenly than sock's, and it was too easy simply to run to the exit and avoid plenty of the monsters. It was also too easy to choose a route that gives you the silver key before showing you the door it opens, which is a little jarring. I would love to see an expanded version of this map.

RickyT23's was a lot of fun, and I loved the way it poked fun at the "prove your worth" trope. Of the three, it looked the most speedmap-ish (in the sense of latter-day speedmaps, made over a few days as opposed to an hour or so, and by authors who are able to do in a few hours what it would take mere mortals months to do), with it's gigantic but fairly plain spaces.

It goes without saying that all three maps are incredible given how little time the authors spent on them. They also evoke the theme really well (if one ignores the "retro" part).

These maps are beautiful. It looks like we get a great new Quake episode every couple weeks or so.

It is really unbelievable, how these artists play with limitations of Quake engine. Sock's and Skacky works remind impressionists masterpieces.

The idea of RickyT23's map is very very interesting. But it looks like it should be more developed.

Anyway, I love this year!

Sock and skacky both have good maps, skacky's being my favorite up until the sudden ending. I LOVE its color scheme though, great change from the common Quake palettes. Only RickyT23's map is plain imo.

Sorry to triple post, and I'm sure this has been said before, but none of these feel retro in the slightest. VERY 2014, especially sock's.

If you have found all four secrets in RickyT23's map, yet the map claims you have only found 3 out of 4, that is because there is a minor issue with the second secret (encrypted with Rot 13 to avoid spoilers):

It's true, I screwed up the secret. I'm glad people enjoyed the map, I literally threw it together in three days, 1st day was building arches, 2nd day was building the layout, 3rd day was gameplay and lighting. I really just wanted people to blast through it and have a little fun. There is actually a hidden floor that I could have used but I ran out of time. Cheers for playing! :)

Thanks, RickyT23! The map is nice, but sometimes you have to hunt for monsters to progress. Also, long brick walls look a bit urgly without small details (windows, uneven bricks and etc). But this takes time, sure. Thanks again!

I played A Bleak and Diabolic Dream (retrojam2_rickyt23), finishing with all 74 kills on hard but only 2/4 secrets (and I only remember picking up one of them, the red armour).

There's a lot to like here -- bold, sweeping, solid architecture and a decent sense of progression (though that would be enhanced if the later, higher areas looked a bit different, even if only through the use of different-coloured lighting).

But whereas the best jam-pack maps feel like small but complete levels, this one feels like a much more ambitious project abandoned through lack of time. The level feels severely underpopulated. It's also lacking in inventive progression mechanisms, so that making your way through the level feels like a rather mundane process of enter room, kill bad guys, press button. It's like a naked Marcher Fortress.

I generally love RickyT23's work (see my recent reviews), but this one isn't quite there. I hope he will follow Sock's example and follow this up with a completed version at his leisure. It feels like it's taken some steps towards greatness, but run out of steam rather than talent.

I guess I would award this 3* in isolation. More comments when I've played the other maps.

I finished Geometry of Murder (retrojam2_skacky.bsp) with all 66 kills on hard, but only two of the three secrets (nailgun at the start, and the megahealth). Any hints on the other two?

I found this one really immersive, the castle feeling much more voidy than RickyT23's because of the it's several interconnected (and one or two unconnected) pieces, rather than a monoliithic lump. Combats were interesting ad fun, and item placement well judged. Some really nice opportunities for infighting, which is always satisfying.

In isolation, this would have been a 5* map six months ago, but on the recalibrated scale something that's over this quickly maybe shouldn't get more than a four. Ah, heck, no, my gut says five stars anyway.

And I'm now done with Sky Eater (retrojam2_sock). Yes, it's very beautiful, and yes it's reminiscent of Metal Monstrosity. I enjoyed it a lot more than MM, though -- I felt less sniped at, and more sense of exploration. That said, it's left me wanting to replay MM, which I guess is a measure of its success.

I found four secrets, mostly of the falling variety (and got all kills). I liked that the final combat, despite being set in an arena, allowed me to back away and do it by sniping rather than melee, and I didn't find it anticlimactic.

As with Skacky's map, I felt this fell somewhere between 4* and 5*, but possibly just a slice less fun than Skacky's. So it gets the short straw, and a 4* rating in isolation. But the pack as a whole another clear 5*.

Enjoyable pack, thought all the entries were good. I found Socks map a lot tougher than his usual stuff. Not sure why. Skackys map was good albeit quite linear, looked really pretty. RickyT's map felt pretty old school. It's not as good looking as the others but I got a very nostalgic feel playing it.

RickyT23's map is the simplest, I'd give it a 2. Skacky's is the most beautiful and fun to play, 4 stars and Sock is in the middle with 3 - the final battle had me with almost no ammo left which is a bit unusual for Sock. So, 3 overall.

Ricky's map proved to be the most Quakeish and yes that is a credited aware to give! Like the intro of falling and the feel of climbing a vastly large structure is done well enough.

Skacky's map was a sight to behold with lovely flow and great atmosphere. Felt like some sort of Anor Londo up in the sky but ...Quake! Good stuff, my favorite of the bunch!

Sock's Sky Eater is gorgeous in its own right. Beautiful greens and blues set you up for some mystical drifting castle scaling! I felt the map to be a tad on the small side, but of course with jams you have to attempt to realize a playable map and not just fill the empty spaces.

Wonderful pack, I recommended it to anyone.

Really nice maps, enjoyed them very much. Especially RickyT23's and Sock's one. Even got some walkthrought demos, but somehow it doesn't let me post them. (Not to large filesize, only ~2.5MB the largest)

Fun maps, but the brick textures tend to wear on when repeated like this.

For some reason the map names on the list on the readme.txt are retrojam1rickyt23, retrojam1skacky, retrojam1_sock, i don´t know if that was a mistake since this pack is called retrojam2 and to load each map i had to change the 1 to 2 on the console