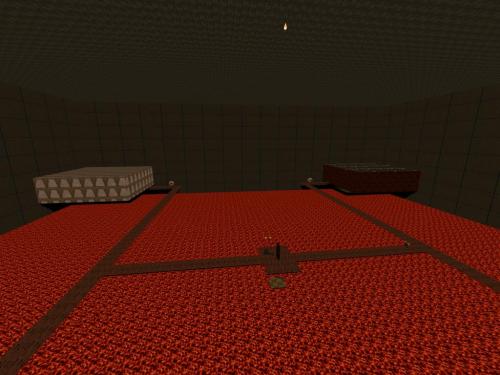 i know.
comparing it to the majority of mods/maps on this site, it is not good at all.

although i did enjoy the fact that it did feel like i was inside tronyn or necros' mind as they were having a really bad nightmare concerning quake mapping!

it really does honestly depict a nightmare setting convincingly. paths that end with nowhere to go. bollocks secrets that you can't get back onto solid ground without dying!
the first room you teleport to reminds me of the drug nightmare suffered by max payne.
it's a bad map, yes, but it still had a very unsettling, cold, absract, dark feel to it that some 'polished' maps lack.
peter tron 28 February 2012, 0:42
there was a moment in the third (fourth?) room, where it was pitch black in the far corner.
you could just make out the teleporter, but as you are about to approach it, you can just make out some silhouettes of fiends sitting, waiting.

he tried to make shadows work, bless 'im, and to a point it DID.

i'd like to see what he could do if he put his mind to it and spent some time designing it better.
there's a few nice ideas, he just needs to work on it.

that gave me the shits!
dehlor 4 March 2012, 13:28
I agree with you.. I often like most amateur but original/eclectic maps than technically good but boring standard maps..
best would be a reasonable mix of them !
than 12 April 2012, 14:00
man! we should do a speedmap event where we take an old map that is really bad such as this one and try to turn it into a playable sp, whilst at the same time keeping fairly close to the original in terms of shape and general theme.
Cocerello Registered 15 December 2013, 12:55

It is a somewhat peculiar map, with a weird progression where you don't know well where to go (some teleport brushes would be good), but i appreciate it for its different combat, even if it seems a bit overpowering sometimes. I disagree with the other comments in that it is similar to other maps of that time, it has a different style.

To summarize, if you want something weird. Play it.

This actually is kinda fun in a crappy way. Definitely creative.

I am open to all, but this is a total crap :( Yes, there is some originality and this level just full of mindless strange, but that's not enough, it just unplayable and dull. If the author want so, he could make a good level based on his ideas, but he didn't apply enough diligence.

i really liked the 'zombie conga line' & the 'grenade run.'

This is one of the worst levels I've ever played... just don't play it, trust me.

Anyone here played any "mockery" levels for Doom? I think this one might be in the same league. It seems like it's deliberately TRYING to be horrible. Honestly, it was kinda entertaining to me because of just how bad it is... it's like The Room as a Quake level. It's one of the worst levels I've ever played, yet I smiled while playing it.

much commentary for a crappy map. i agree it has some nice ideas, executed poorly.

I think the slew of reviews demonstrate one thing about this map. That it is horrible beyond repair, but you should still try to play it at least once.

It's kind of like a trainwreck: It's horrible, but one just can't help watching. This map just kept me wanting to see what kind of weirdness awaits beyond the next teleporter, and for that I give it 2/5.

I have recorded a Nightmare-difficulty demo, showcasing what I consider to be a more or less intended way of completing this level. I regard is as a puzzle level and consider it being nowhere near the worst Quake level ever created. In fact, I have rather enjoyed it.

One secret was deliberately missed as it appears before the level shows you how to look for such secrets. This last secret is in the lava room with the railings, immediately left of the teleporter out. It allows you to kill the last optional shambler from the very first room.

This demo was recorded keyboard-only, is the result of my first successful attempt to record it, contains a number of quite major mistakes in execution (especially during the grenade run) and, overall, gameplay is very stilted even according to my own personal standards. Still, the purpose of this demo is elucidating the internal logic this level is seemingly built upon, and, I hope, even despite the execution-level flaws, the intent behind my various actions is still comprehensible.

This is not a 100% kill run, and some of the fights are deliberately omitted. When showing an optional fight I first make a point of making it obvious that it is indeed optional. Other gestures include bringing certain elements (sometimes quite subtle, pay attention) of the level into the spotlight, as well as showing the directions in which particular monsters are looking. When playing not on Nightmare difficulty, killing the very first ogre with the shotgun might be unavoidable, although I am not really sure about that.

The demo is about 18 minutes long, and I sure take my sweet time over the course of it, so keep that in mind as well.

It also works with the Aftershock-retextured version of this level taken from Aftershock CD: https://www.quaddicted.com/reviews/level.html

If anyone could re-host this demo, record a better implemented run based on it, or render and host a video from it on some video hosting, I wouldn't mind either of those possibilities.

I play badly, sorry for that, the level's inner workings, however, I hope, do make up for that.

You either understand someone at a half a word, or you don't.

Quake is sure unexplicable. What for.

Im 100% sure that the bridges were supposed to interconnect the lower areas of the 4 big cubes in the first area but the level got corrupted or the map maker didnt know how to do it, really weird map but somehow fun.