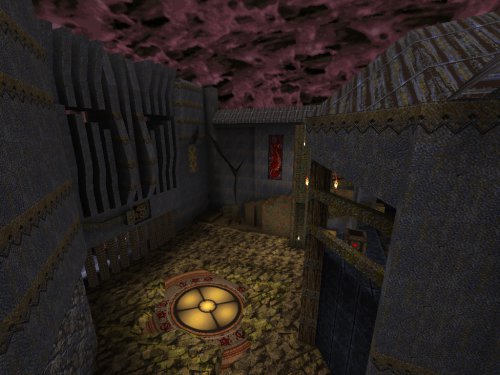 Not bad. It feels pretty oldschool in design and execution. The brushwork is blocky and evocative of times gone by. I like it.

However, it doesn't feel like a place that would exist. The layout makes little sense if you were to take it out of the game context, which I think is possibly a detriment to the map. Maybe I'm just not in the mood for it today, but I think this map is just too "gamey". I actually got stuck trying to find the silver key due to the map not naturally teaching or guiding the player through it's abstraction.

Still, I had fun. Four bags of popcorn.

Very well designed map with very good ammo balance. The visual design is top notch too and it has of interesting moving setpieces and usage of color to differentiate the areas. has a well-executed semi-abstract architectural motif. i enjoyed it

I rather liked this one, personally. Challenges are well done, architecture is acceptable if not stunning; an all-around good time.

Very nice! Thought the pacing was really good. Never got bored, and never felt like a grind. Thanks for the map.

Well done! Those secretes must be very well hid as I was only able to find 3 of them. Was short on nails and shells on the final room tho, but that is ok since you can just run to the exit.

First of all, really nice map, the only downside for me was that there were a lot of unnecessary backtracking, just, press a button and this open, but not with a purpose. Although a lot of them were well placed, and some did it very well (like opening the water gate that you could see behind the wall)

A strange mixed bag, this. It suffers from some arbitrariness and some blocky, over-bright 1990s-style design. But I had a great time playing it, very much enjoying the sense of exploration in a space that most of the while had no single clear path. It's funny how rare that is.

Very tight on supplies, I keep running out of everything. Should I play on hard instead of normal?

Strange proggression. Not for everyone, but intriguing.

Also a mixed bag for me. Near the beginning I was a little confused because it seemed like there were so many different avenues I could go down at once. Some would be dead ends (for now) and some would end with buttons that I hit, no sure what they did. Eventually I started to get a feel for the layout and I was having fun with it, until near the end. Like some others have said, the ammo seems a bit tight. In the final room, when two shamblers, a vore, two fiends, some spawns, and a shit ton of scrags all appear, I was totally over it. Glad the exit was right there, cause if it wasn't, I probably would've just quit anyway.

I don't mind that the level design is abstract, I think its more important that a level play well than look like a place that could actually exist. This layout, though, didn't often naturally flow or lead me to where I should go. A lot of going back to previously locked areas asking "Maybe this is open now?"

Still a decent time though, and a lot of work clearly went into it. Probably better for players who like a challenge more than I do. Giving it a 3.