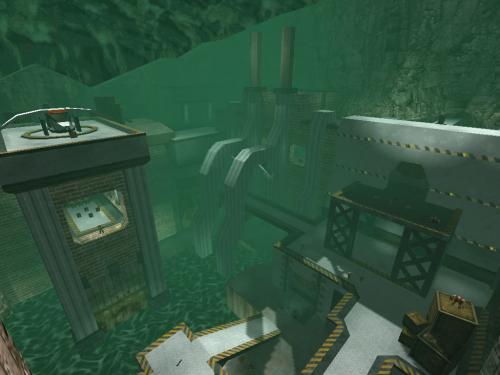 Two industrial/slime-themed maps with custom textures and horde-based combat: a large factory in a canyon and a small oil rig on an ocean of slime.

Note: These maps require the Drake mod and an engine port with increased limits.

4/5 with 27 ratings
You can NOT add ratings
if you are not logged in.


necros 28 October 2011, 4:33
The whole oil rig take is cool, partly because it's new but also just because it's a really great theme to try out.
In Tronyn style, these maps are hard and tough. Wide open areas with multiple sight lines means monsters are shooting at you constantly. You need to try to keep under cover until you can get in there and wipe out the groups. I find the second level is the cooler looking of the two. Set on an offshore rig, you have to make your way up to the top of the thing, dodging monsters and activating lifts.
Otoh, the massive scale of everything can sometimes leave some areas looking a bit empty. Of course, all those monsters should be keeping you busy so you don't notice these things. :P
hkBattousai 15 July 2012, 22:13
A flawless and entertaining map. I suggest everyone to play it.
5/5
Icantthinkofanickname★ Registered 13 December 2013, 17:52

That was a lot of fun. Like necros above, I really liked the refreshingly different oil rig theme. The gameplay was full of wonderful over-the-top violence, but I actually did not find it that hard, as the maps keep you well-supplied. You often face large numbers of weaker foes that go down quite quickly, and the maps allow you to indulge in mowing down grunts, enforcers, ogres and scrags with the lightning gun, hyperblaster or super nailgun (and still have enough firepower left over for the bigger monsters).

On the other hand, quite a few of the textures look oddly low-res, there is a moving platform you have to take in the first map that is easy to miss and does not seem to give you a second chance, and there are all these incongruous medieval/fantasy items, weapons and runic columns about – not to mention the enemies: I know they're evil, but how did Bri... er, I mean Skittish Linoleum get hold of Shamblers, Ogres and Scrags?

Just shy of a 4 to me for the above-mentioned reasons, but still definitely recommended.

Okay, it seems all of those scrag spawns seemed to have inspired something here. Some truly recognized horde combat and with the help of the Drake mod, it is quite satisfying.

I never saw this theme in a Quake map and it was a very different experience...although some of the scaled textures are butt ugly. The sheer amount of enemies to mow down with the gatling laser and ultra fast SNG is cathartic as you can get. I had a blast exploding multiple shamblers with the ice bolts.

Not only is the gaemplay satisfying, there is also a second map which again has never been used before in such a way (Oil rig adrift a verdant sea.) Super fun, this is a rare case for me where the pure fun factor overrides the cons and boosts to a lowly 5 (but 5 none the less!) rating.

Being a base set this is an odd one out in Tronyn's catalog, him being otherwise exclusively interested in fantasy/medieval environments. Ironic, then, that it plays pretty much the same as many of his other maps: huge with plenty of verticality and interconnectivity, and lots of tough horde combat.

Well, this seems like those NSOE where the fight starts right off, no time to asses. But that done with weak enemies is a good thing, you can still manage to develop a strat. The texture are ugly to look but it gives a coeherent tone to the map. Industrial, ugly looking, medieval and base enemies mixed together, a lot of distant enemies, giving the player the choice to engage with nails or getting closer.

About the first map: Very cool indeed. Although I think the crossbow is a little bit overpowered: one kill is ok, but one hit kill with chaining effects, WHAT. Cool secrets, maybe the message to go to the end wasn't necessary in the acid secret. Just out of curiosity, I tried to walk in the stone walls surrouding the map. Surprisingly I could do it after pressint the last pillar, reaching distances were the hit scan shotgun had no effect on the scrags, pointless, but it gave a cool image: the scrags nearly fading with a look at the hole map.

The second map took me by surprise, I though since it is a theme in tronyn maps that you can play the maps in a packet in any order, but hell was lose right away. Not that it matters, I'm growing my hair to donate to cancer patients and if fell in my eyes, leading to the first time I was ever killer by a dog in quake. The map itself felt very nice, always enemies above you, but instead of looking up and shooting (boring) you just track them down.

As a last note, thanks for leaving the cell minigun right at the start with plenty of enforcers to kill and replenish ammo. Super nailgun? What is that noise. Mowing down enemies with not so conventional and recurrent weapons is a delight. Like the widowmaker in AD maps.

Where can one obtain Drake? It doesn't seem to exist in the Quaddicted database, at least the link above is a 404.

Ah, I found an old copy of Drake at http://www.quaddicted.com/filebase/drake290111.zip

Or I guess you could install the Sludge Factory maps in your [Unforgiven(unforgiven.html) folder, since that comes with an updated version of the Drake mod.

Or I guess you could install the Sludge Factory maps in your Unforgiven folder, since that comes with an updated version of the Drake mod.

It points to exactly the same location as the one you typed out in your subsequent post. Just tested and it still works fine for me.

Bu "the link above", I meant the "Dependencies: drake" in the metadata, which points to https://www.quaddicted.com/reviews/drake.html -- but that page just says "drake is not in the database."

But you're right that the note in the description does link to it. I overlooked that, not realising the word "Drake" was a link.

Anyway, I replayed these maps, for what must be the third or fourth time, though for some reason I've never scored them or commented on them before. I like how much of a change of pace these are from most maps. They are very much about horde combat, but not just rushing in with all weapons blasing: many of the confrontations are about finding cover and figuring out a good way to snipe at the edges of the horde without being exposed to all of its members at once. Both maps start out very difficult, because of the player being in such an exposed place, but both become rather easier once the first combat is survived. Anyway, lots of fun even if it's well short of Tronyn's best work, and worth four stars.

This is some good stuff. 'Nuff said.

What a really good time I had playing these maps! The Drake mod makes the whole thing work for me. I played on skill 2 and was satisfied with the balance.

The gameplay is hard and challenging, but not hard enough to become frustrating or tedious to me. Fun was a constant factor: I liked being on my toes all the time watching for snipers shooting at me halfway across the map! Fun was having enough ammo and the right weapons to deal with the waves of enemies.