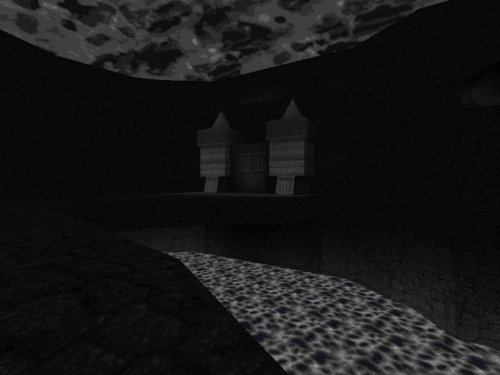 3.8/5 with 8 ratings
You can NOT add ratings
if you are not logged in.

A decent to nice pack. None of the maps are truly outstanding, but at least three of them are certainly above average speedmaps.

sm110_ drew (“Pakedovarfleau valley”): Very impressive in terms of looks and complexity and seems more like a beta version of a regular release than a speedmap (as is often the case with Drew's speedmaps). Gameplay was somewhat frustrating, though, with combat usually involving lots of monsters in cramped spaces, with the surrounding darkness and the threat of the void making things even more difficult. Enemy selection also seemed a bit random, with an eclectic mix of monsters from different themes. On the other hand, funny on-screen messages kept things light and entertaining despite the somewhat oppressive darkness everywhere.

sm110_generic (“SSG – Size does matter”): Very pretty and spacious map with a healing pond/fountain that adds an interesting dynamic to combat. It is not as large at it initially appears, though: just when it seems to gather momentum, it's over.

sm110_negke (“Melancholia and her grey wasteland”): Absolutely beautiful greyscale visuals and an interesting take on a familiar fight with a particularly fine final floral flourish, but gameplay and scenery are both a bit repetitive. The title and on-screen messages seem to be taking a stab at the Smashing Pumpkins, which is kind of funny. I have read that negke is toying with the idea of a regular release using similar back-and-white visuals, and I am keeping my fingers crossed.

sm110_ht (“Irky Jerky”): The weakest of the four maps. Still OK-ish, though. Tough but not impossible.

Okay, I loved Drew's map; my only complaint is that it was too short. I gave this pack a 5 just for that one; the other levels are 3 or 4, but I really wanted to call attention to "Pakedovarfleau valley."