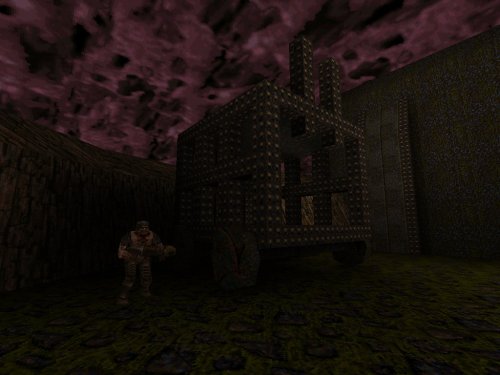 3/5 with 3 ratings
You can NOT add ratings
if you are not logged in.

Love the map; hate the title – not the self-deprecation, but the implicit machismo.

Somewhat like Sock's experimental Q3 SP map “The Edge of Forever”, this map centres on puzzle-solving (mainly of the secret-spotting variety) with zero combat. I found it very enjoyable, but very short (as can of course be expected of a speedmap). Getting the dog into the cage was also a little finicky, as it tended to get stuck on the structure.

It would be great to see this concept expanded into a full-fledged map, with perhaps a more complex rescue mission -- or a series of missions of increasing complexity , of which this could be the first. The animals to be rescued could perhaps also become increasingly dangerous (e.g. multiple dogs or a fiend), making it harder to lure them to safety without killing either them or oneself.