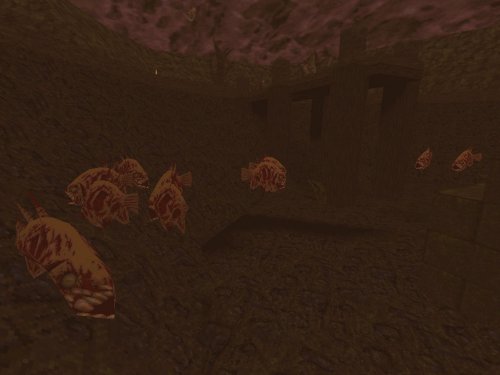 sm143_negke (a surreal, abstract interpretation of a “Quake lake”) is one of the most otherworldly maps I have seen (pity the swirling vortex at the top is stationary. It would have looked fantastic if it were spinning, but I guess that's not technically possible). It is basically a platform jumping puzzler and it took me a while to realise what I was supposed to do, but then it was fun – up to the last box/button, which I simply could not reach. I tried several times using different routes, but I always seemed to be too far to make the jump, and finally just cheated my way over to the box. Maybe I am missing something, but my impression was that the final box was just a tad too hard. The rest was great, though, including the ending.

sm143_negke2 (featuring a more traditional lake) is a wonderful map with a realistic, natural aesthetic similar to the “City in a Forest” speedmaps. My only minor gripes would be that the cells at the end should respawn (because if you grab them before you realise what you have to do, you're stuck) and that the map exit also did not make too much sense (there seems to be no logical incentive for the player to go there; I found it merely by accident). Otherwise, a superb little map.

As for sm143spirit and sm143trinca: “Carnage!” seems like a bit of a non-theme. What could be less inspired than constructing a simple setting and throwing in a huge number of monsters? There must be tonnes of mediocre beginner maps and jokey speedmaps that use this formula, as do these two maps. Execution is good though, and both maps look pretty and provide a few minutes of mindless fun. They are just not that interesting.

SM143_trinca: what a crazy difficult challenge!!!

Icantthinkofanickname: I had no problem making all the jumps in negke's first level. You have to jump to the last one from the top of the blue-gray pillars. But I never found the 2nd and 3rd button in negke's second level, so I suppose we're even...

negke's first level is the only really outstanding level in this pack, but it was worth the download in my opinion.