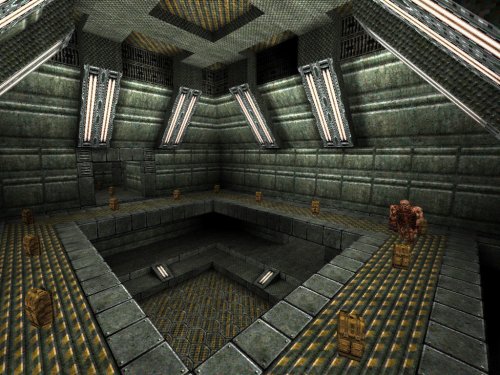 3/5 with 10 ratings
You can NOT add ratings
if you are not logged in.

A very original selection of maps that for the most part live up to the promise of the theme. Gameplay can be very frustrating (but perhaps one should treat that as part of the homage?).

SPOILER ALERT: Read no further if you want the maps to be a complete surprise.

sm158_negke1 (“Qujo's Adventure”): A side-scroller (!) where you control a rottweiler. Your avatar moves forward automatically; all you do is jump to avoid hazards. The forward key seems to give you an extra boost to stay in the air longer (correct me if I'm wrong). It can be tricky to get used to and frustrating to complete, but it is amazing that it was done in a regular Quake map.

sm158_negke2 (“Paq-Man”): The definite highlight of the pack. Fun, nice-looking and the most successful of the four negke maps (probably since it uses pretty standard Quake mechanics, to which the game/engine lends itself). As the name suggests, this is basically 3D Pacman in a Quake environment, where you have to collect all the backpacks on the map. Thanks to the limited ammo, the four ogres function pretty much exactly like Pacman's ghosts: once you have picked up enough backpacks, you can go on the offensive, but only briefly. The rest of the time you are better off running away.

sm158_negke3 (“Qalaxy Fighter”): A space flight simulator, where you pilot a spaceship and shoot other pilots while avoiding asteroids. It is impressive and original, but unintuitive and tricky. I ultimately found it too frustrating to be much fun.

sm158_negke4 (“Shooting Qallery”): A shooting gallery, as the name suggests. You stand in one spot while enemies spawn in a castle diorama. Interesting once you get used to the dynamics, but I found it almost impossibly difficult: you have little room to move and virtually no cover, with grunts, enforcers, ogres, death knights and even a vore firing at you in various combinations.

sm158_drew (“Cruciform Empennage”): No idea what 80s game or genre this map references. Perhaps someone can enlighten me?

It looks pretty impressive and intricate for a speedmap, but gameplay is punishingly hard. You have to play almost perfectly in order to complete the map, as you are often under attack from multiple angles and health, armour and weaponry is very scarce. In addition, it is fairly easy to fall to a floor below which does not kill you, but from which there is no escape; you are simply stuck there (unless I'm missing something).

Perhaps these are all deliberate callbacks to a game I do not know or do not recognise, but it also makes for a very frustrating experience. With some gameplay adjustments (e.g. give the player a bit more health, armour and weaponry if the attacks are to be this brutal, and provide some means of getting back to the top if you fall to the floor beneath) this could be really enjoyable, though. It certainly looks nice.

Total agreement on sm158drew (“Cruciform Empennage”): I played on medium, and the first two thirds were just insanely hard. Then suddenly, just like that, all the monsters were dead, and _then the map gave me loads of health and ammunition that I had no use at all for. It feels like 8/10ths of a truly outstanding speedmap that never had any playtesting at all.

After I'd killed everything, I couldn't figure out how to get up on top of the crate to pick up the silver key. (In the end I cheated with ¬fly.) Did you figure out the right way to do it?

Also, did you ever get the super nailgun? I didn't. Missed the other secret, too.

Keep in mind speedmaps are usually untested and very rough in every aspect. Some are too easy, many others too hard. Though their small size and short playtime (3-5 minutes on average) warrants several attempts in most cases. Just don't take them too seriously. And the theme is not enforced, so not every map follows it.

In the Qujo map, the movement keys do nothing, but you can hold the jump key for a little bit longer to get a slight edge. Of course it's still very difficult, because what counts is the bounding box of the dog monster, not the visual model. Also, for some reason, the map doesn't work in Quakespasm.

Thanks for the response re: Qujo, negke. Actually, it worked for me in Quakespasm (which was also where the forward key seemed to make the dog jump higher/longer -- but maybe that was just my imagination).

Something I had missed before (and I think MikeTaylor did too) is that sm158_drew is a Quoth map. Maybe you or Spirit could add that in the map description above, since at the moment the only indication is "Quoth" in brackets after the map's name in the readme -- which is very easy to miss.

Now things make a bit more sense. The floor does kill you. Monsters are a bit more spread out. You don't fall onto two ogres and you now have a nailgun from the start. It's still absurdly hard, though, but I guess it might be a reference to some of those brutally hard 1980's arcade shooters. Maybe that explains the insulting messages throughout, too (the last one was overly infantile, though). Unless, of course, Drew was not following the theme.

MikeTaylor: The sng is not a secret. There is a hole you drop down into just before getting to the silver key, which is the same compartment that the sng is in. If you're playing in Quoth, that makes the silver key accessible.

The two secrets are a super shotgun and yellow armour. They're pretty fair (i.e. not unreasonably hidden), so I don't know if you want me to point them out to you.

And, negke: I'm not sure if the first part of your comment was partly directed at me, but I certainly get that speedmaps tend to be rough and are not meant to be taken too seriously,

Still, though a large number may be ignorable joke maps, some are really amazing in terms of what the authors manage to do within a short time and how far they push the boundaries of experimentation -- which is why I thought it worthwhile to comment on and rate the speedmaps too (while not holding them to entirely the same criteria as regular maps). One can accept speedmaps for what they are and yet still try to separate the wheat from the chaff.

And in case it was not clear before, in my eyes you are an absolute master of the genre.

Maybe the secrets (and the way to the silver key) will become obvious if/when I replay it in Quoth. Thanks for spotting that.

Having now read on Func_Msgboard (more or less) how Qujo was made, I am even more impressed.

Added a "quoth" tag. Still think the fact that Drew's map requires it should be in the description, though.

I played all the negke maps as well. I'm torn between awe at how far outside the box he managed to push the trust old Quake engine, and frustration at how difficult they all are to play. Exception: the Pac Man one, which I agree with Icant is the definite highlight.

Added quoth as a dependency too. Now hopefully no-one else will make the mistake MikeTaylor and I both made.

Except now Quoth breaks my maps.

Oops, sorry, negke. Better just to keep it in the description since not all the maps require it?

my computer telling me this zip file is invalid. Also sorry for the categorization issues!

Even if the gameplay was not always enjoyable I was really impressed by the good way negke apply classic 80's gameplay into speed map, worth to give them a try