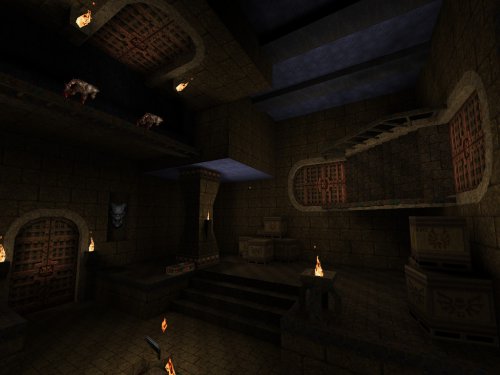 Speedmaps inspired by M.C. Escher. "Break your brain" (sm177_digs) by digs is a high quality map that could easily hold its own as a full release. The others are standard speedmaps. The source for Cocerello's map is included.

4/5 with 18 ratings
You can NOT add ratings
if you are not logged in.

Digs' map is incredible. Uploaded a video a while ago (forgive the gradual audio desync): https://www.youtube.com/watch?v=ihQUlGXr_M4

Cubic Nightmares (sm177_shamblernaut) is a great deal more interesting, but just a bit too confusing for me. I think what's happening is that when I fall off the cube, I get teleported onto a different face of the same structure, which is a neat concept. But I've yet to put together a concept of when I land up where, and why, or how it all fits together. (That, and the chonic shortage of ammo, is very alienating.)

Stairways in the skies (sm177_doomer) is more fun -- a relatively straightforward blast set in a small hub and two outdoor stairways in the sky. Nothing too revolutionary, but good for a speedmap.

Agree wholeheartedly with Lane Powell -- digs's map is truly incredible. Amazing visuals, well-designed gameplay and mind-bending like only a digs map can be. It would fit right into the "Anomaly"-series (digs05 and digs06).

I can also see why some people in the Func_Msgboard release thread felt that it should have been released on its own, as it might be overlooked by many players as part of a speedmapping pack.

The other maps in this pack are standard speedmapping fare. Nothing wrong with that, but they're not nearly in the same league as digs's map.

Updated the description to do a bit more justice to sm177_digs.

And I agree completely with MikeTaylor's assessment of the other three maps. sm177_doomer is fun and good for a speedmap, whereas the other two come across as not-quite-successful experiments.

1/5 for sm177_coce. Sorry, Cocerello. It's not bad visually -- I do like the starkly contrasting texturing -- but it's just unplayable. Kind of a pity, too, that this map requires Quoth, as it really does not seem to add anything and makes playing the map pack needlessly complicated.

1,5/5 for sm177_shamblernaut. Nifty concept with lots of potential, but doesn't quite work (yet).

Unsurprisingly, I concur completely with Lane Powell and Icant regarding Break Your Break (sm177_digs) which is a delight to play and deeply disorienting. great stuff.

Meanwhile, Shamblernaut's map lives on in my mind. I hope he returns to this concept, as it is rich in potential. (Or, if not, I hope someone else makes a map that works this way.)

Do have a look at digs_4hour too. It's no sm177_digs, but it's surprisingly good.

Even i die most of the times on ID skill 1, so I DON'T recommend playing it on QUOTH skill 2-3 (untested on purpose for playing by crazy people (if anyone dare to play on this setting i recommend raise the brightness to the max to make it easier)) and ID skill 1.

Speedmapping Pack 177 on The Quake Grave

Overall this pack is very good and houses a lot of good ideas!

As everyone has already stated, digs map is amazing! I love the bridges and trees on the side of the wall, and then using said bridges handrails as a platform to other areas, such a cool idea. Great idea and execution all around with this one.

Cocerello: I assume this was sort of meant to be a replayable, short, arena style map with randomly spawned weapons? I couldn't do anything on skill 1 with all of the dogs coming after me, but once I bumped it down to skill 0, it was manageable. For a 1 hour map, this is pretty cool.

Doomer: I liked this one! The stairs in the 2nd area that loop around and all over are very cool and very inspired by Escher. Fun little map!

Shamblernaut: I think this was a cool attempt at something different. I would've almost rather it had been an empty map with no monsters where it was more about solving the puzzle of the map itself, as I found the monsters to be a bit annoying while I navigated this weird shape. All in all, a very interesting and unique map!

Dig's map truly shined in this. I like the idea of Shamblernauts map, it was more disorienting to me than Dig's map honestly. Doomer's had some nice double-barrel shotgun action going. Cocerello's map just was fked, unplayable.

All of them, besides Cocerello's, played on NM and really was smth worthile, considering these are speedmaps.

cool, the water part at the end was a challange with nightmare.

dig's map was fun as hell