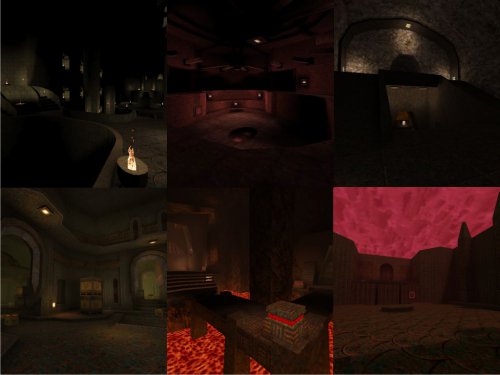 My first map changes the later half of the encounters greatly depending on the choices the player makes, so it can be very different on each play. Also, the map can be exited before the shamblers show up, so it is the player's choice to try to kill them.

The second is an open exploratory map with three routes that intertwine themselves with several leading mechanics, and has different starting points, weapons, and secrets depending on the skill chosen. The replay value is huge but that also means that it is possible to run out of ammo even though all can be killed personally while ending the level with lots of ammo, not counting secrets.

And by the way, as the layout was open, i added DM gameplay for my second map. It runs Ok with Omicron bots but i would be greatful to have feedback in that regard.

Newhouse's offering feels like a full-featured map with a lengthy path and many surprises. The clean-cut brushwork works well with the limited textures.

Forgot to comment, and finish Nait's and Newhouse's for years ..., probably because they are hard and very long for a speedmap pack.

Speedmap pack with three speedmaps, two turtlemaps, and one jam-alike map. Those two from before were played on skill 1 this second time.

Naitelveni: To summarize, it has detailed and polished looks but not even half as polished gameplay and gameplay related brushwork. It is better to play on skill 0 just to watch the looks.It is a typical jam-alike map, with polished brushwork, mostly dull and repetitive horde combats on two levels with not that much sometimes room to move around, and small choices on progression. Has several brushwork parts which undermines gameplay and some big issues on ammo depending on the route taken. For some reason has some weapons repeated even if it is impossible to miss the first one.

Newhouse: linear 2d and very long turtlemap, with varied combats and traps, some spikes on difficulty with one or two remaining after the first run, a few insta-death traps, and novel ideas. Requires several tries to finish and while it is not unfair most of the times, tires quite a bit as is on the frustrating side. Save for one of them, finding the secrets makes the experience completely different, and difficulty becomes even easy sometimes. The styled lights is a nice addition, but need minlight to work well.

SavageX: solid long speedmap, with mostly straightforward and varied 2d combats, on a linear tree shaped layout. The joke made me chuckle.