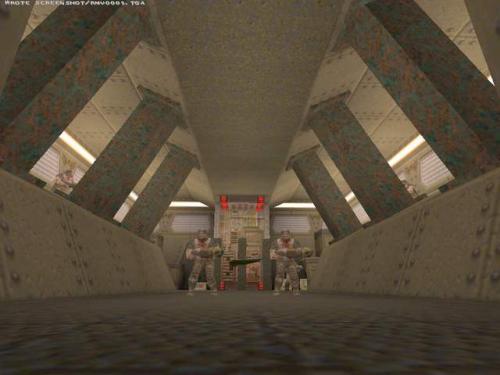 Wow. I only played this first one after sm56 & 57 and it's quite disappointing to say the least! There are only 5 maps in the pack and, despite the presence of Scampie and Metlslime, only CZG's map is really good. It's an incredibly fast-paced and fun romp where you tear through 80 mostly base enemies (there are a few fiends) in mere minutes. Actually feels more like a Doom map than a Quake map. The only thing I didn't like is that you're literally thrown into a bullet hell from the get go without any time to get your bearings. Merciless!

As usual with this "4 seasons" series, CZG's map exits to Scampie's. While I usually like his work, this one didn't do much for me. Unlike CZG's, there is no real effort at map design here and no sense of progression. It's just 3 rooms where you have to clean the first to open the next, rinse and repeat. The first room is annoying as you have to take pot shots at enforcers and ogres above while taking cover from their sustained fire. And the other two rooms are packed with enemies that you just mow down with the NG (or SNG if you come from the previous map). Yawn.

Asaki's Basement of Extreme Suck is quite aptly named, as it's pretty much garbage (at least he was aware of it). A small series of ugly and identical rooms where enemies persistently face away from the player, making it feel more like target practice than an actual videogame.

Metlslime's is yet another major disappointment. A very tiny map consisting of two similar, almost identical rooms connected by a small corridor, with an added super short func_train ride over lava. The map also starts in a bullet hell, with the notable difference that there's not much else to save it.

Lastly, Starbuck's is an odd mix of boxy and poorly textured rooms with an otherwise visually interesting idea in those huge pipes at the start. The gameplay is very easy and as unexciting as they come.

TL;DR, download this pack for CZG's map and don't even bother with the rest.