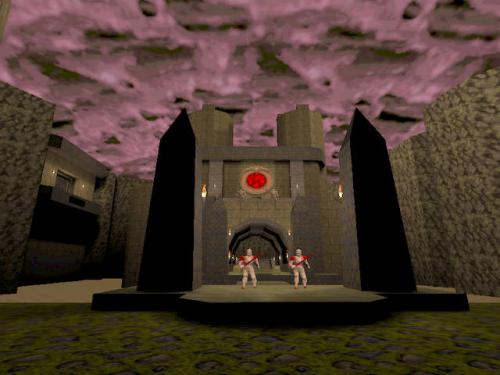 4/5 with 10 ratings
You can NOT add ratings
if you are not logged in.

The CZG/Scampie/RPG trinity are the best maps in this pack, bite-sized brutally fun romps that for some reason exit into each other like a revolving mini-episode. I was wondering why CZG's map was so loaded with supplies, but believe me when I tell you you're gonna need them for the next map! Scampie's is essentially one arena with horde combat but it's short and fun, and RPG's start will undoubtedly remind you of e2m2 a.k.a The Ogre Citadel. Nice touch.

The rest of the maps are unfortunately not sequenced but some of them (namely Lev's and Xen's) would have benefited from this treatment. Hrimfaxi's and PuLSaR's are pretty good. Leviathan's is kind of ugly and suffers from ammo shortage at the start despite the quad and supplies provided in the first room: I had to finish off the 2nd vore with the axe. Also has a useless pent just before the exit when there's nobody left to protect you from, yay! Moz1 is... uhhh... a joke, I guess? Zero gameplay, it's just an ugly, empty castle with non-functioning doors and no exit. Moz2 is just as ugly but at least has some (mediocre) gameplay and an exit. As for Xenon's, it's basically a serialized copypasta of the same area over a square grid. Boring to look at and boring to play, has a pointless flooded basement where there's absolutely nothing to do, and also suffers from ammo shortage at the end - but it generously gives you 100 more nails once everyone is dead, big whoop!

All in all, a half good half bad pack worth playing if only for the trinity mentioned above.

Oh BTW, I forgot to mention that PuLSaR's filename contains some uppercase letters, so you'll probably want to rename it.