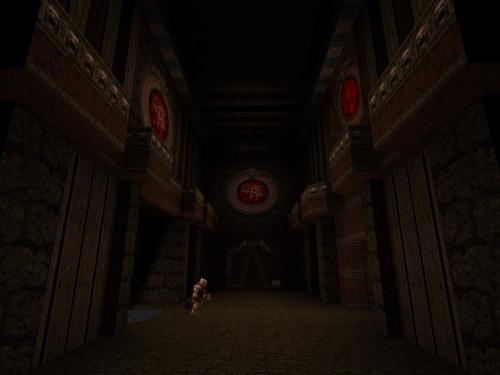 On walking into the exit door of Xenon's map I was told I left something important behind. I poked around for a bit and then noclipped but found nothing--anyone know what this means? I was missing three kills but I assume this was the rotfish bug in action.

this message is a reference to Sandy Petersen's episode four

Actually, you're told you've left NOTHING important behind. ;)

And finally, the 4th "season". Another smaller pack like sm55, with only 5 maps including a base-themed one (so only 4 elder maps).

Both of RPG's maps are very short and not that interesting, especially compared to his output in the previous two sessions. RPG1 is mostly empty. Not sure why it has 2 pents on top of an armor, but they're utterly unnecessary. This map didn't function well for me: the zombies in the watery section never spawned in and I had to noclip to kill them inside their closets. One moment could have been moderately challenging, but with a pent and the "secret" quad, well... This map exits to RPG2, the base map. That one is a bit better but again, too small and not challenging enough to be any kind of memorable.

Scampie's map is undoubtedly the best of the lot. Short but packed with intense action, including a pretty insane finale, and captures Sandy's visual style quite well with terracotta textures and lots of darkness.

Starbuck tried to tackle the Nameless City style, with lots of moldy yellow-greyish bricks, wood and blue windows, only on a much grander scale. The thing is, these large spaces are mostly empty and could use at least twice the population. Boring.

And last but not least, Xenon finally made a bona fide good map. Woohoo! Lots of dimly lit green bricks, flayed corpses and chiaroscuro effects. Maybe a bit too much copypasting but there's only so much one can do in 100 minutes, so it's excusable. Combat is good and feels "episode 4" enough with lots of hell knights, fiends, vores, spawns, of course a shambler and even a few ogres.

Episode 4 might be my favorite after ep. 3. It sure ain't the prettiest or the most refined, but I love its general darkness, abstract design, intense action and puzzles. I wish more people would have participated because the couple of good maps here focus on mood and combat but no-one tackled abstraction and puzzles. And no-one emulated the iconic Azure Agony style.