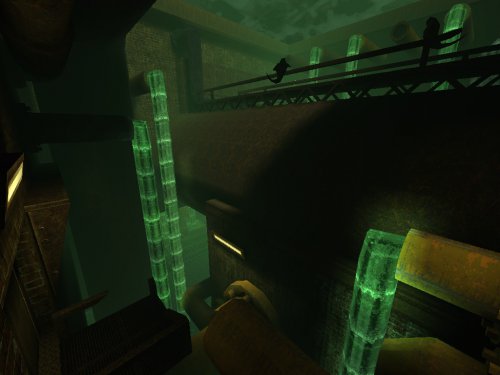 Note: This map requires a source port with increased limits.
[rezipped for Quaddicted]

Really enjoyed this map. The bright green slime, the gritty corroded metal, the contrast between the two--everything here is great. This reminds me a bit of "The Chasm" from Doom 2, but with a much eerier atmosphere.

Really enjoyed this one. In terms of atmosphere, it reminded me most of the second level of Warpspasm: oppressively slimy, sort of metallic. And also of Tronyn's Sludge Factory. There's a nice non-linearity to it, allowing you to go on four or five little mini-quests in whatever order seems best to you.

After everything people said above, I really enjoyed the transparent windows.

Very stylish. Confusing as heck, too... had a hard time remembering where the bars were after I found all four buttons to open them. Actually found the alternate exit first.

There's a good bit packed in this map and the atmosphere is terrific. Thoroughly enjoyed it!

I do not even know where to begin. Perhaps I will begin with saying that this is one of the best maps I have played thusfar, certainly in the terms of ambiance, environmental design, intelligence of difficulty level setup, aspects of non-linearity, as well as constructive use of technological advancements, primarily the lighting.

Is this map a masterpiece of psychological suspense. I am not being a huge fan of the 'SAW' movie franchise, but despite that, there has been an association accompanying me during the gameplay, that this must be one of those mental asylum trials, orchestrated by a master interrogator of some sort - a surgeon, operating on the mindset, working the protagonist through the labyrinths of difficulty layers, that in time, the poor soul has built for itself, to imprison oneself in safety from the notion that there is a better way of life to be had.

"Acid trip" - that is the theme of this level. There are a lot of acid pools, acid rivers, acid lakes, acid sewers and channels and sewages, all bathed in perception numbing, acidic mist. But the biggest and most telling acid, is the vibe.

For the visual design, the textures, are rad - I love that "cr8" stuff. it has this unique indie-quality to it; shining and appealing but not industry-grade at the same time, as if purposefully avoiding the latter with certain soul-imprinting simplifications. Wonderfully done. The fact you have used some textures from a 'Dead Space' franchise game, is like an instant familiarity node for me - the original 'Dead Space', is like a tattoo on my heart-mind; even though the 'Dead Space: Extraction' - the one you particularly refer to - was not released on PC.

I like the addition of natural light coming in some places, this map pulls that off better than most. It was interesting to be forced to take damage at the start and wait for health.