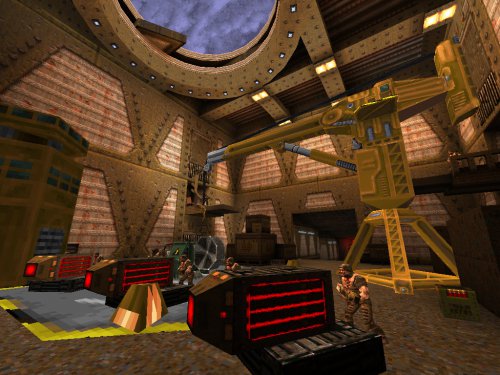 Small idbase level set in a miliary base/hangar. It features three distinct route choices: normal combat, permanent quad damage, and slime maze, and is supposed to be the first map of an episode focusing on these route mechanics. It comes with a few custom models, and the map source is included.

I may be missing a lot, but I tried all the paths avaible.

The quad damage was more like a slaugther run. Fun in its own sense.

The slime path was dull, but I don't like time limits in a place that you don't know. I like taking my time exploring, maybe giving the chance to explore before and then add the slime run would be perfect.

The normal one was the most pleasant. Liked the textures and new pallets used in the crane section.

Overall a cool experience, but since the replay value was not very amusing for me, didn't enjoyed as much as I would have if it was a more linear map. Cool idea though.

My first impression is the same as brunomiwa's. The alternate routes are an interesting idea, but the execution is spotty. There are no glaring flaws, just a bunch of small things that collectively hurt my enjoyment:

Sorry if these seem criticisms are nitpicky. I liked many of the map's other details, like the laser guns and the backpacks on the bunk beds. But I think it could be improved significantly.

Thanks for the feedback!

The biosuit path has been problematic throughout the map's development. One of its main design principles from the start was making it about stealth, since I thought swimming in sewage pipes would make for a perfect setting for a stealthy approach to beat the level.

That's why it was interesting to read your comments about the route being imbalanced compared to the other routes, since it was designed around a completely different playstyle than the others. It adds another layer of complexity for comparing balance between the routes. Sure, a comparison can be made between the powerup durations and the amount of required kills, but balancing the route by making the biosuit last indefinitely and/or making the route more combat-centric would kind of defeat the original intended purpose of the route.

In fact, since there's very little combat to provide challenge in the biosuit path, keeping air supply limited in the biosuit path was actually a conscious decision with the very intent of balancing out the lack of combat. If air supply was infinite, there would be virtually no way you could die in the slime maze, arguably making the maze less engaging due to the lack of urgency and challenge. In addition, the purpose of the movement hindering pipes in the maze was to add another layer of challenge to the maze.

However, even if my balancing efforts might make the route more challenging, the path still just doesn't seem to work and resonate with players. Would an infinite air supply but with death traps in the maze (such as squishers, flames, spike shooters etc.) work better for players? I don't know; haven't tried it out yet.

And also, does stealth work in Quake? Is it fun or satisfying trying to sneak past as many monsters as possible by using the ring of shadows, when in the intermission screen you're slapped in the face with a kill counter with little to no kills? Is stealth rewarding in a game so centered around killing monsters and providing no rewards or honorary mentions for clearing a map with stealth? Or maybe it's simply just the fact that the biosuit path is unsatisfying, and the gameplay it does provide doesn't balance out the lack of combat.

Okay, that turned out to be a lot longer response than I had anticipated! @_@ I guess I just wanted people to know that a lot of thought had gone into the design choices and want them to know the justifications why I ended up deciding on keeping the air supply limited, for example. However, replying to your review did make me come up with the idea of death traps as an alternate way to try to make the path work, so I'll probably experiment with that approach, too, for the final release.

Okay, I see where you're coming from. My hang-up is that the middle and quad routes are variations on the same thing (one is normal combat, the other amped-up combat) while the slime route provides a radically different kind of challenge. I think if you had provided an either-or choice between combat and an obstacle course/exploration, or a choice between three different styles of combat, the different paths would have "felt" more complementary.

I think you're also right that the slime path simply doesn't appeal to players as much as combat. But de gustibus.

I am yet to play this map but I'd like to weigh in on the stealth/RoS subject:

Yes, stealth can work in Quake - see Sock's In The Shadows mod.

The Ring of Shadows is a power-up I usually find completely useless in regular Quake maps due to a) my playing style and b) the usual inability of mappers to use it effectively, but if a map is specifically designed for it, I guess it could make for an interesting gameplay variation. Sure, a good chunk of quakers doesn't care about anything else than a good ole run'n'gun in Quake, but some of us do like outside-the-box thinking like in the explore jams, etc...

What was the slime maze about anyway? I only found one way to exit it and it was a slipgate that turned me back to the start.

I played the Quad Path first, which was fun with the constant Quad Damage. Second run I used the middle Path, that was the most pleasant, imho. At last i tried the Slime Path, and I have to agree to others in here, that it doesn't really made a lot of fun, also to me. In overall I like the 3 Path approach in 1 Map. I also liked the new Models, and the animated Radar.