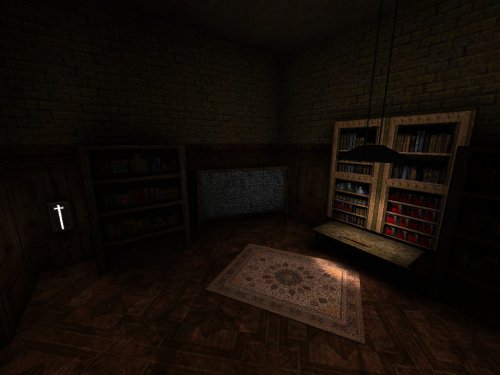 4/5 with 29 ratings
You can NOT add ratings
if you are not logged in.

A very nice map with somewhat of a Honey vibe in the roman brick architecture drenched in fog. Some clever gameplay mechanics and a very cool nod to a certain Gordon Freeman...

Symphony of Science on The Quake Grave

I thought that SoS was a really good Quake map! Nods to Half-life aside, there is a lot of good going on here. Great pacing, enemy usage and it's amazing how the level connects within itself to create the puzzle of traversing it. All of this done within a respectful and polished old school Quake style.

The only real nit pick I have is the grenade lob/button puzzle area, and some button logic further on but these are so minor that I'm not going to g into here. You'll have to watch the video for those.

Great job Ubiquitous, looking forward to the next one!

Yeah, it was pretty funny watching you scratch your head about that grenade puzzle! :D This one was a bitch, and you played the updated version! The original had even less of a hint - to tell you the truth, I only figured it out by accident: in the original release, you could jump on the railing and hop on the other side from there. When I mentioned that on the Func_Msgboard thread, Ubiquitous fixed it to force us to solve the puzzle his intended way...

Very nice, convoluted progression. I do think that grenade puzzle is too hard, though. It would be better if you could see the button through a glass pane, so you know it's the shootable type. Anyway. very enjoyable.

The mapper had fun coming up with some interesting ideas, but failed to polish them in to an altogether fun experience for the player. Case in point, a puzzle that involves opening a door from behind by lobbing a grenade through metal bars could be satisfying for the player to figure out but for the fact that the bars are so narrow it's possible to bounce the nade off them several times. I would recommend increasing the gaps between bars, or just making the bars func_illusionary.

It also took me far too long to realise that the boulders in the first chamber are climbable, as the lowest outcrop is poorly lit. Climbing puzzles can be fun, but it was only out of sheer frustration that I launched myself at those boulders several times, by which point any potential reward was diminished.

The map contains several inconsistent visual cues, such as a button texture that sometimes signifies a shootable button and later a pushable one.

The crowbar easter egg was fun and there's some impressive brushwork on display in some of the small details, albeit straying somewhat from Quake's strong aesthetic.

Combat was mostly fun but no encounter really shone or provided a huge challenge.

I don't think you can nerf the grenade puzzle any more. Even the first version was easy.

Dwere it's not about nerfing it or making it easy, it's about making it satisfying.

The grenade puzzle is actually quite nice. I just think the gap between the bars should be wider, as mentioned above.

The grenade puzzle was a bummer and with no better hints just a waste of time.