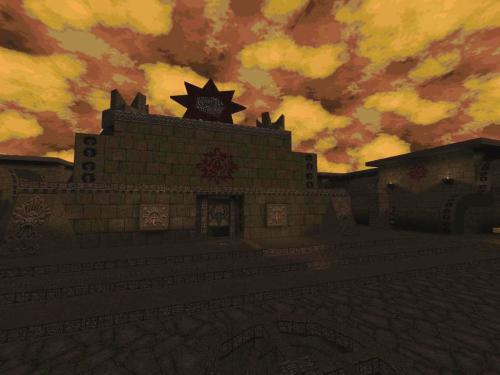 The Tomb of Chak Toh Ich`ak

The map is good but confusing, samey, flat, monsters are placed in boring predictable parallel places.

that's why so many people quit mapping :)

But I invested 9 month of my life in this map and I think it deserv better ratting than it had, gameplay is fun in my opinion and brushwork have original designs I don't play any other games... everything came from my mind is not a copy paste of any other game!

I don't care anymore, no more work from me will be done... most of this comunity don't deserv, that I waste my precios time with mapping!

I will keep playing Quake maps because it still the game that gives me more pleasure to play!

Be cool Spirit, is nothing again't you, but I still think that the map is better than your opinion!

It's a good map. You can see it got a lot of work into it. It has a straight-forward nonlinear layout and has some original combats and ideas. The brushwork is varied with good details. The secrets are well placed.

But it needs a little bit more to make into the top. As a fellow mapper, I do understand why Trinca thinks this is unfair, seeing that this is probably his best map and he put a big amount of time into it. If it were a 2000 map it would have 5 stars for sure. Lighting doesn't have too much contrast, the brushwork, even if it is a mayan building, it's a tiny bit squarish for it's time, maybe because of the quake textures used in big brushes, open parts and big rooms have a bit dull combat, with lots of monsters thrown in so you have a very long combat, maybe less monsters in a more unfair for the players environment would be better, but inside the buildings, the combat is very good with lots of good ambushes.

Trinca, all those ''buts'' i pointed, take them as compliments, those are things that show how close you are to a perfect map. All are things that if tweaked a little bit, would be more than OK, they DON'T make the map by any means bad. I do prefer people telling me how to improve my map rather than telling me how god it is, so take them like that :) .

I hope to see your next map, Trinca, if this one is like this, the next would be too awesome.

Awesome stuff. Thank you Trinca. As for the gameplay, it's just slower paced than other maps. But that doesn't mean the map it's worse, I found it super fun. Hope to see some other works of yours.

I'm retired :) thanks for comments anyway ;)

For what it's worth, I agree that this is more than a four-star map. I awarded five, even though it falls short of the very best, because it's closer to 100% than 80%. But maybe the 1-5 rating system doesn't allow enough granularity.

I particularly enjoyed the vores-and-hell-knights ambush on picking up the silver key.

A very nice temple/tomb complex with good layout and nice details that I found enjoyable to explore, despite the so-so lighting and monster placement. The fight before grabbing the final room was pretty well done. Some parts were symmetrical, some parts weren't, overall I didn't mind much.

It's a shame Trinca took criticism so poorly. They seem to have made some maps after this one (largely speedmaps and only one full release), but have mostly stopped since 2010. I hope it was because they lost interest in Quake or got too busy with "real life" and not because this map got a four-star rating on Quaddicted. :P

I do think Trinca would have been wiser not to offer a rating for his own map. However, the record shows that I awarded this five stars three years ago. So whatever others make of it, this map has a lot of appeal to at least some players.

Pretty cool map. I really wish the lighting was better. If that was improved and some of the earlier encounters tightened up (for example, the first outdoor encounter was easily dealt with by just running around in a circle), then I would definitely give it a 5. It has some nice brushwork and I rather enjoyed the latter half of it.

Huge architecture sometimes repetitive with good previsible ambush...I like that

I picked up the gold key, pushed a button, was told "You can leave now", but I'm now stuck in that area because bars have been drawn. Any hint?

I just finished all the maps released by Trinca alone. I loved them all.