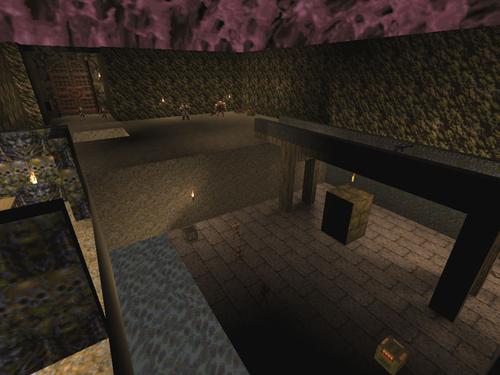 Too much pain for me because of very cubish level-design... Although, there are a couple of interesting ideas.

Not much of a looker but actually quite a bit of fun to play through.

Agreed with Noxat. It was a pretty solid map when it comes to gameplay. A little bit on the easy side, though, since you're given a quad and a pentagram almost at the same time at one point. They could have rather been hidden in secrets, which were unfortunately completely absent in this map.

I think the end battle was quite memorable, because it allowed for some strategy.

This map despite being boxy and with strange texture and brushwork has great challenging game play and is populated with a large amount of monsters. Especially liked the final battle with three shamblers, that was an intense fight. This map gets a three out of rating from me because of the game play and it is a decent map to play despite it being from 1996.