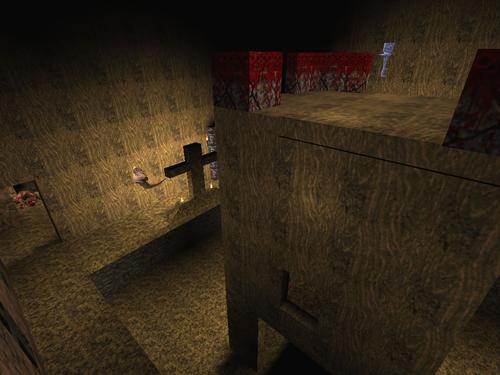 I thought about giving this a 2 for looking halfway decent and being more consistent than most 1996 maps, but I don't think it deserves it. Irritating unfair combat (multiple almost unavoidable fiend traps), broken doors that you have to noclip past, annoying lifts that don't let you go down to where you need to go. This just isn't worth even looking at, it's an awful map. 1/5

It was quite hard to choose between 2 and 3. The gameplay was alright and somewhat varied. There were windows that provided both me and scrags opportunities to take potshots at each other and then there was combat in all that slime, keeping up a nice level of pressure to take the enemy out ASAP before the biosuit expires.

My biggest gripe was the lazy brushwork and especially the texturing, which made the map quite ugly. A smaller annoyance were the platforms that had me bumping my head against the geometry quite often. So these gripes lower my overall rating to 2/5.

not a well created map with strange texturing and map design choices that make it illogical and not very fun to play through. I will give it a 2 out of five rating for some of the intense combat provided in the map.