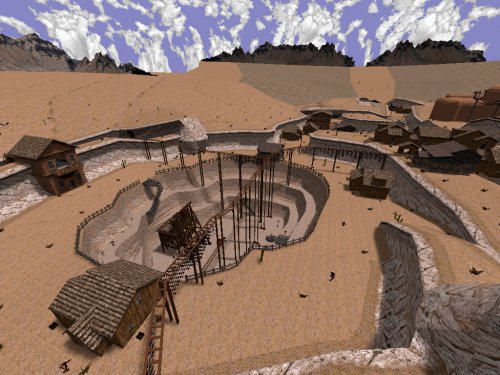 Episode with five huge, uniquely themed levels: a beach resort under a Golden Gate Bridge, a puzzle map set in an industrial storage facility, an Asian temple, a twisted otherworldly fortress, and a western mining town. Most of the maps use custom textures; the texture wads and the map sources are included.

Note: These maps require an source port with severely increased limits and BSP2 + protocol 999 support, such as Quakespasm 0.93.0 or higher.

Seems like many people have problems getting this running. You'd need the latest build of Quakespasm which you can grab here: http://quakespasm.ericwa.com/job/quakespasm-sdl2/

Then run quakespasm.exe -game shib, either thru a shortcut or a BAT file.

First of all, this map pack is VERY stingy on ammo. I had to resort to axing and triggering enemy infighting quite a few times. Surprisingly, medkits are a plenty, but this doesn't mean much if you haven't got any ammo to fight with.

Maps are huge, the largest made for Quake yet, but I have to admit they're too big for their own good. Quake's movement speed, weapon range etc just doesn't work well in such Build games like environment. Ultimately you'll be running around trying to shotgun 50 ogres and this is just not my idea of fun.

The Rocket Launcher would've helped a LOT (think Shadow Warrior which also had very large open levels but let you use powerful explosives indiscriminately so that you can quickly dispose of enemies), but it's surprisingly nowhere to be found.

From an artistic point of view the maps are somewhat interesting as they try to tackle different settings such as East Asian, Western etc. But the brushwork and textures are pretty crude. Not to mention that the lack of fog and skyboxes makes the outside areas seem almost overbright.

Ultimately, Ter Shibboleth is only interesting from a technical point of view, like "how big can you make Quake maps be". But from the gameplay perspective it's a chore where you crawl over huge open areas, get stuck in brushwork, all the while thinking if you can survive your next encounter with 20 shells and 50 nails.

So I was swimming across the Golden Gate, ready to explore Fort Point, quite sure there's a neat secret somewhere behind it, even if it's just a decoration. I was rather excited. There wasn't anything quite like this in Quake before.

Then I hit an invisible wall. Gee, thanks.

I mean, it's definitely a step forward from all the Quake maps where the watery horizon is being cut-off after, like, maybe two meters, exposing the sky. But still, all that space, and so little opportunity compared to it.

Didn't have any ammo problems in the first map on normal. Aside from the time when I took an elevator to where one of the exit keycards is located, and bumped into a vore and a shambler with approximately nothing. The elevator didn't work anymore, so I panicked, found a balcony and threw myself off it, which lead to a long acrobatic journey in search for supplies. I like this kind of stuff.

Dwere: It was impossible to go beyond where you hit the wall because those areas exceed the space limit of 8192^3 units of Quake.

If you want maps that make fuller use of the space available, I recommend Warp Spasm.

But the game draws stuff beyond that point just fine. Moreso, I can noclip there and walk around.

Anyway, I wanted to praise surprisingly good frame rates, but then I reached the third map. I disabled vis for shits and giggles, and it didn't make the performance worse. I still dragged myself to the end of the map hoping that the next one is gonna be faster, but no such luck.

What I've seen so far is very impressive, if somewhat crude at times. Ammo balance is still fine. At some point I had more cells that I knew what to do with, but that ended as soon as the lags started.

Yes, maps 3, 4, 5 are not VISed, since they will supposedly take 100+ MB VISed. So you will suffer a pretty big performance hit. Funnily enough, if I turn scr_showfps on it still shows 60 FPS, even though my mouselook is dropping frames.

Nice maps! Some maps are scary, some are epic. I wanna mappack with big-big-world with separated islands, where we see every island from every as in sun.map

It seemed irritating to me that "Sun" just kept on screaming "Hexcalk" since I released a Japanese/Asian-themed level before Ter Shibboleth was finished. It's better than mine, you know. However, one thing to note here is that shib3 was actually developed before I created hc1. To think "Sun" was influenced by hc1 is an exaggeration, and if any then hc1 barely helped the completion of shib3 circa 2017.

This mappack by ORL is admittedly better than my maps, so I would be a better Quake-related person if I spent more time commenting on others' maps themselves than my own works. Nowadays I comment in small amounts on Func_Msgboard so that I calm down.

It seems like a successful experiment in advanced scales. A new sight of the void that is not hidden in the fog or darkness. And, no doubt, shib2 and shib5 looks like completely finished and yummy!

What the hell is with some of the severely low ratings here????

Yeah map 1 not that fun beyond the novelty (although the nonlinearity and hopping on rooftops is cool), and even map 3 is only pretty good aside from the theme and huge scenery. But maps 2, 4, and 5 are just jaw-dropping. 2 has the awesome teleport puzzle room, 4 is just a great new take on an old Quake theme with consistently surprising constructions and gimmicks, and map 5 fully delivered on the promise and concept of the first map.

Sure the unvised maps may tank your framerate but I found it to be worth it. As for them being too large to navigate quickly, well all I'll say is these maps finally learned me how to bunnyhop.

Between this and Cataractnacon ORL is a true visionary in my opinion.

The regular release of Quakespasm can now run this, as of version 0.93.0. Changed the map description accordingly.

I thoroughly enjoyed Needlehorn (shib1), which takes place in a resort hotel on an island near a Golden Gate-like bridge. At first I thought exploring lots of similar corridors and rooms would become confusing, but in fact the layout is well thought through and I always had a good sense of where I was. Ammo didn't seem particularly low to me (contra Greed's comment), but I tend to play in an ammo-efficient sniping style anyway. There is a big, beautiful secret near the end which gives access to the hotel roof. There is a ton of ammo there, so you can stock up for the subsequent levels; also, a lot of monsters only appear if you reach this area.

Looking forward to the next level.

On the second level: I hugely admire the big puzzle room where it keeps turning upside down every time you go through a teleporter. But I can't for the life of my figure out the solution. Does anyone have a video demo for that area?

I cheated my way through the second level, though I'd still like to know the right way to solve it.

On the third level now (Sun) -- close to the end, but I can't find anywhere to use the Gold Key. It doesn't open the little turret that is the second building. What am I missing?

Oh, I found it's one of the cliff ledges behind the houses.

Hello MikeTaylor, I hope you're enjoying the episode so far. I have made a demo for you playing through all of shib2, showing how to solve each puzzle. If I were to guess, you got stuck on the three button puzzle, which I admit is probably the most difficult.

Many thanks, KenChenner, I will check on that!

In the mean time, I finished the fourth level, Shattered Soul of the Scarabrus -- all 212 kills on Hard, but only 1/5 secrets. (Though come to think of it, I found two others, but I didn't pick them up because they were megahealths and I already had 100.)

Pros: lots of great set-pieces, and a unique sense of the whole area being literally crazy. Cons: arbitrary progression, loss of access to some previously visited areas, and a rather sudden, anticlimactic ending. I enjoyed it, but not as much as I did the very beautiful Sun.

Finished the last level, Across the tattered Amyclaean and loved it. Probably the best "realism" map I've ever played. So much to explore, so many bad guys to pick off along the way. Ended up with 319 of the 321 kills (but again only one secret).

All in all, this is a truly great pack, not just because of the execution and playability, but because the concept is so unique.

I'm not sure yet how to rate this pack as a whole. I haven't tried all the maps yet, and really didn't get on with a couple of the giant ones that I had a go at.

"Blastocyst" is great though! Mostly a "puzzle" map, so you fundamentally have to be OK with button-puzzle-stuff in your Quake-ing to enjoy it. I am, and I liked the central gimmick about how the main space works (which I guess I won't spoil here). And the actual puzzle-ness ends up being pretty straightforward.

One thing I'm not sure about: there seemed to be one puzzle that requires an understanding of how to best use/exploit strafing in air control, while taking your finger off of the +forward key. That seemed a little arcane for something on the main progression path... however maybe I was just overlooking the actual solution.

Also the last fights leading up to the exit are placed in a super-trippy setting. I don't think I've seen anything quite like that, and it was disorienting in a cool way.

I ended up quite liking the western-themed map too. Good work at presenting an open zone but still having discrete routes that you need to find and use to open new areas. The terrain work is distinct too, cool stuff. Buildings are a bit cookie-cutter and mostly not interesting inside, but they're not really the point of the map.

The map "Shattered Soul of the Scarabrus" won the "Best Oddball Map" category at the Quake Awards 2018.

Really incredible work here. Shattered Soul of the Scarabrus is one of my favourite maps of all time--surreal stuff really trips me out in the best way possible. Loved that they were all incredibly different, I love hodgepodges. The biggest downside by far: the ammo was way too tight; I had to use -god until i got to my next stockpile of ammo. It was worth it to see this to the end, though. Thank you.

I liked the last map a lot. I would give the pack 5/5 just for that one, but, considering the low frame rates and that I didn't care much for the other maps, I just can't bring myself to give this more than 3/5. The last map ran at 15-20 fps for me, and the third map was even slower. It's hard to enjoy a Quake map that way.

At last there is an engine that can run these maps in all their glory: https://github.com/andrei-drexler/quakespasm/releases

Get this and you will no lag whatsoever.