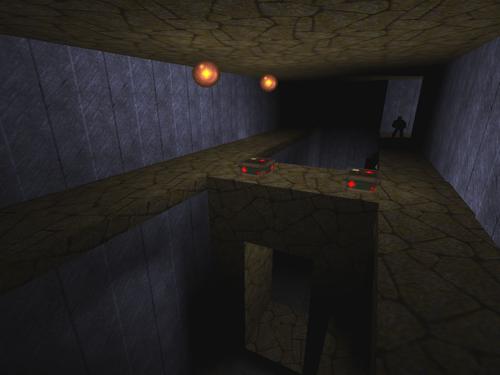 Welcome To The Mill

Welcome to the Mill on The Quake Grave

It's blue, it's dark and I couldn't find the exit.

The map itself is fine, but it does what most maps do in this era of mapping which is suffer from not enough time in the oven. If I could finish it, I would consider it an average map. However I couldn't finish it, and no single player map should be without a way to get to the exit! (Unless of course I somehow missed the way to it, even though I was clipping around?)

A short and dull maze, unless you enjoy random teleports and searching for buttons in dark rooms.

Aesthetics: Plain and dark. Blocky rooms with no eye-catching setpieces. Not very interesting or engaging.

Combat: It's okay. You're thrown into it immediately and enemy fire comes from pretty much every direction and sometimes from the dark. So you're kept on your toes and challenged. So that's nice. Health pickups are maybe a bit too generous, even when playing on nightmare, so that lessens the challenge. You can have pretty satisfying Quad runs, though, so that's pretty fun.

Rest of the gameplay: You're supposed to open doors by shooting buttons in varying degrees of darkness, one of them being fully hidden, which I consider a huge oversight. The button was actually accidentally revealed to me by enemy fire, which spared me from frustrating button hunting.

Esrael, evaluative tags, like dark, bland and plain are not allowed. Please don't add more of them.

There is a list of them below to where you add the tags for so you have a reference for the next time.

Well, the way I see it is that the tag "dark" doesn't explicitely take a stance on whether the map is good or bad, unlike all the examples of unacceptable tags listed on the tags page that do take the stance.

What I do agree on is that "dark", and even more so "bland" and "plain" are subjective: I might consider a map with very few light sources dark, while someone else might not. I might consider a map with nothing but one wall texture used and with no decorative setpieces bland or plain, while someone else might not. That's why I wanted to use those tags only when I thought the vast majority of players would agree with me; when I thought the darkness and blandness were so blatant, that the map could almost objectively be considered such things.

I was further encouraged to use those tags, because I had seen them being used as tags in some other maps, so I thought they were considered acceptable. Or then the adjectives were used in the map description.

But anyway, tags like "dark", "plain" or "bland" don't mean that the map is bad or should be avoided (even if most people probably consider such things unwanted); they give more descriptive tags for potential players looking for new maps to play. Who knows, maybe some person might actually want to find maps that are dark or plain. Again, they might disagree with me about them being dark or plain, which is why I try to use such tags only when I think most people would agree with them.

Whoops, only now did I read in the tags page that subjective tags are also not allowed. Well, to my defence, as stated, I tried to use them when they would almost universally be agreed on.

But yeah, I won't use them anymore.

To be fair, other common tags like "small" and "medieval" are subjective, too.

Good point! Albeit Quaddicted has given a somewhat loose definition for what constitutes a small/medium/large map (whereas the previously mentioned tags dark/plain/bland haven't been given a definition by the site), it is still open for some subjective interpretation.

Medieval, metal/runic, wizard, base etc. are less subjective, though, because those tags generally refer to the texture wads used in the map, which can objectively be observed. However, there are maps that have textures from multiple different wads, for example, which makes determining the map theme more subjective.

Not worth a play through, the map is too dark and and is confusing to know how to exit the map. This map is poorly built and it gets a one out of five rating from me.

I have no idea how dark or medieval are subjective.