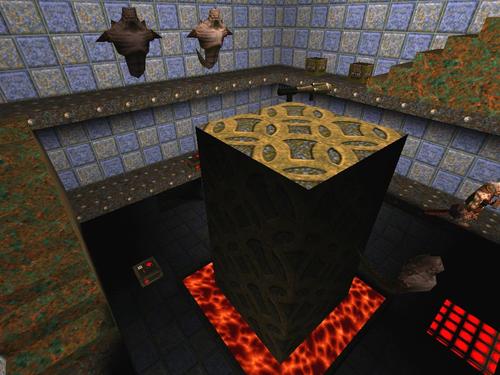 Themix is like an uncut jewel: the potential is there, but it's hopelessly rough around all the edges. It doesn't particularly shine in any area. It feels as if it's going through an identity crisis: Am I a single player or a deathmatch map?

The author had stated in the readme that he didn't know how to separate single player and deathmatch entities from each other, which unfortunately shows in the balance: Powerful items abound, which makes the map a breeze to play. Powerful items call for lots of enemies, which are too few. And even if there were more enemies, the map is too cramped to accomodate very many of them.

The geometry of the map feels more suited for single player, but it suffers from an inconsistent theme and puts the enemies in even a greater disadvantage compared to the player. Buttons don't really follow the id visual clues of shootable red buttons and touchable other buttons. Secrets aren't marked either.

The map ping pongs the player from one end of the map to the other without introducing something new in between like repopulating the map with new enemies, which is unfortunate.

The final room is also quite anticlimactic, throwing nothing but the lowliest enemies at the player, who by this time is pretty much at his/her most powerful.

But as stated, the map would have potential for a lot more, but the execution had sadly fallen flat on its face.

Interesting map. Although I could not understand the need for the gold key.