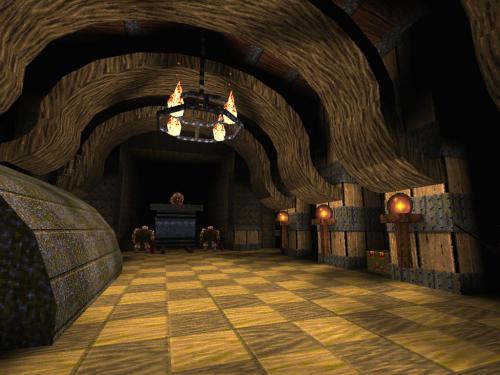 Episode with six small maps of varying themes and a few new monsters.

i liked it. i was bummed when i discovered there was no 'myth7'.map.'

To be honest, I didn't get far with this. On the first map, I was able to enter the gold key door, but couldn't figure out any way to reach the silver key. I really tried hard for like 20 minutes, but after I didn't make any progress at all, I just called it a day. Maybe all these maps are great and everything, but I just can't figure it out. And if I don't know how to intuitively finish a level (without cheating), for me it's not worth playing. To remain fair, I won't rate this (for now, maybe I find out later how it works).

Played on skill 1 by mistake. Most secrets found and most enemies stripped of their souls.

Overall this is a decent episode, rough in brushwork and lighting, decent in combats and layout. Sometimes bad, sometimes good on ideas. Ammo/armour is a bit lower than ID maps in amount, and well placed. Health is missing in the first two maps, increasing with the episode and around ID maps at the end. Secrets are varied and fun to find, and with adequate rewards. New monsters add a lot and are well used.

The episode begins with a first map full of button finding progression, and some puzzles and decent traps and func_illusionaries as progression. It is hard to advance as the mechanics to find those buttons are mostly new, at least to me, but nothing outrageous to find, as there is messages and other tips, not easy either. Health is low here, so each hit counts. What makes this first map very bad is that you can get stuck if you aren't fast enough, as most doors close after opening, and most of the times there isn't a way to open them again, resulting in the player having to load a saved game or suicide himself.

As the episode goes on, it is more polished and less and less bugs and problems are found, little by little, the maps changes the gameplay, diminishing the puzzles and traps, and increasing the weight on combats. Brushwork goes better too, except maybe the last one. Bosses fights were enjoyable and felt good as a change.

Also, lIke dBAudio, i was left craving for one more map. The last ones were fun.

QUESTION: why is there a myth6.bsp both outside and inside the pak?

The weapons dont look right, its like there resolution and size are way out of sync.So on that alone i didnt play it.