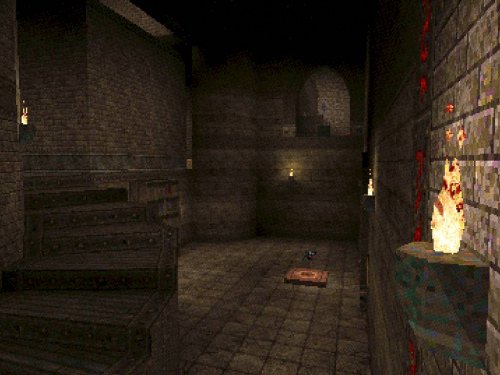 Note: difficulty settings are not implemented (all skill levels play the same.) Map source is included.

Is this your first map? Because if it is, I'm really impressed. Simple, but quite fun and interestingly laid out.

Nice! I like the texture choices and the "curvy bits" -- some good construction there -- and a special visual pizazz award goes to the backlit shambler at the end. The fights are pretty fun, altho they probably rely too much on spawning enemies directly into the combat space. Really good first map.

One minor note, it was kinda weird for the silver key door to just open onto a teleporter IMO. Alternate approach would have been to let the player see the teleporter there but block it with gate/bars.

Very nice for a first map!

The style may be a slight bit inchorent i bits - but all in all a quite nice map. Good use of the texture pack.

This mapper has spent some time learning the editor! And the visuals lead me to believe that the mapper has photography as a hobby, due to the use of effect lights?

I hope to se more from Thuby! Thanks for sharing!

Cool map. Interconnectivery at its best. Simple and brutal encounters. And I appreciated tightness - without shallowness all could have beem triple times easier in a bad way. The way it is now is perfect imo. Also knave is my personal fav among non official sets. 5 stars

Quite relentless fights on offer here and not an whole lot of room to maneuver, but I think just enough to make it feel fair, as you're given the nailgun very early, so you can try to stun the enemy in the tight spaces. The level might not be a casual player's cup of tea, for whom difficulty level implementation would've been a welcome addition.

The map looks nice and is nice to explore. I found the second secret only on a secret hunting run, and after seeing what kind of a secret it was (a shootable red button in an obscure spot), I understood why I didn't find it. Maybe I'm just not wired in the head to spot these secrets, but they've always been a pet peeve of mine. I think they often have too little clues going on for them and don't often blend in logically with the architecture. At least the reward is quite substantial for that secret, but the hunt is rarely very enjoyable for this particular secret type. Sorry for the mini rant, moving on.

All in all, maybe I'm just being salty for that one secret (and for dying once), which makes me want to rate this something like 4-, but if I try to look past that, I think the map is more like 4/5 territory. Good job, Thuby, for a competent debut!

There's not very much to this; but what there is, is nice. It's pretty solidly constructed and there is a sense of progression. My biggest bugbear for this one is the unnecessary teleporter behind the silver-key door. With rare exceptions, every teleporter in a Quake map is a confession of failure. Link the map up physically: let us feel the space we're moving in.