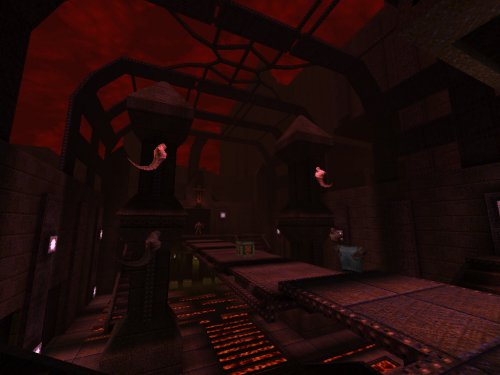 This one has no comments too? Well, let's hope that Arrrcee posts a link to his The Quake Grave video about this map.

I really want to try this out, but unfortunately it doesn't work with the Quake Injector.

All other newly released maps from there work fine :(

Very nice first Quake map with a nice metal style. A little dark, which had me bumping into some walls, and I completely missed the lighting gun until after the final fight--didn't see where it was and got trapped behind a pillar by 3 shamblers (on skill 2). Very tight design for the most part but not too tough. Keep mapping!

It still doesn't work The error message is:

Sorry, that was in response to YukiRaven -- meaning that I fixed the website link.

I think I see what the problem is, but I don't know how to fix it myself. I'll alert Spirit and negke.

In the mean time, you can try installing and playing the map manually if you like:

Download the zip file, extract it and then copy or move the files "tofaz.bsp" and "tofaz.lit" into Quake[or whatever your Quake directory is called]/id1/maps. Than start the game with "+map tofaz". Or start the game, pull down the console and type "map tofaz" (without the quotes).

I did the manual installation and it works :)

However the lighting is strange, some of the lights are burnt out and the map is really dark, compared to the screenshot. Also it lags slightly.

I'm running it with vanilla Quake, so maybe it's the port that's causing this? With DirectQ it doesn't work at all. Do you have any suggestions for another, better(?) port?

Thanks for your response, although i have only played about 15 minutes, i'm enjoying it quite so far. Nice work :D

I'm running it with vanilla Quake

Do you mean WinQuake? Yeah, in general that's not a good idea for newer maps, since many of them exceed Quake's original limits, so you need a newer engine. That's what the note at the top of this page means ("This map requires a source port with increased limits").

Do you have any suggestions for another, better(?) port?

I would definitely recommend using Quakespasm, for this and other maps. It stays true to the original aesthetic of Quake, but has drastically increased limits, so you can play the very latest maps with it. It is actively maintained and arguably the de facto standard engine for current Q1SP mapping. In fact, if you look at the readme (tofaz.txt), you'll see that it says:

Quakespasm is the suggested port to use for this. ... I have not tested it with vanilla Quake or other engines.

Thanks for the instructions and sorry for being such a noob ^^

Im playing it now with Quakespasm and everything works fine.

Happy to help and no need to apologise. :)

Temple of Azathoth on The Quake Grave

I really enjoyed myself in this one! I know Yuki has made some Doom content in the past, but it's hard to believe this is his first Quake map, it's really well done! Nice work, looking forward to more.

I enjoyed this and admired the build-quality, but I found that it all felt a bit too artificial, and the progression too arbitrary, for it to be a classic.

Like MikeTaylor said, the architecture was spot on. With the lack of ammo in the beginning, there were room for some neat traps. Specially in the silver key room, I went downstairs first, went for the nails and armor, bang, had a great time. But it has some issues that I will point out for the sake of a more detailed critic.

First thing that annoyed me, and it happens in a lot of maps, is that the author puts a teleporter where the player will hear it, but it isn't a secret. Be a monster room for further map filling or an 'go back' teleporter, it just makes the player axe all the walls. In this map, it happened twice. And in the way to the silver key is more annoying. Why not just put it near the silver key. You had to backtrack two rooms with refilled monster and then a teleporter to the key. It felt very like the cutscenes in batman games to extend the game with unpleasent cutscenes.

In the gold key area, what was with the vores teleporting in the lower floor, under the pathway. They present no menace at all.

And overall I think there was a oversight in contemplating the map layout with the monster path finding. For example, in the last battle, after you pick up the lightning gun, due to the floor arrangement, the shamblers can't get to you, so the last thing in the map is just a boring shoot and hide.

And one last thing, there are some places you can jump and avoid the intended way to complete the map. Like in the second ladder, due to the architecture in the torches, you could jump behind the ogres (and pers the scrags teleporting right at your side). There was another instance that it was more impactful. Don't know if it was intended or not.

Agree with the previous comment about the progression being arbitrary--to me, the map feels more like a collection of set pieces than a real place. That said, the combat and architecture are both consistently good and the level of detail is impressive. All in all, a great debut map.

This is really nice. the detail and lighting are top-notch.

Great and very challenging map, haven't found all the secrets yet though

This map looks much better than the screenshot lets on. There are some challenging moments (especially the ending), and health packs are rare. However, as is often the case, Ogres prove yet again to be useful idiots.