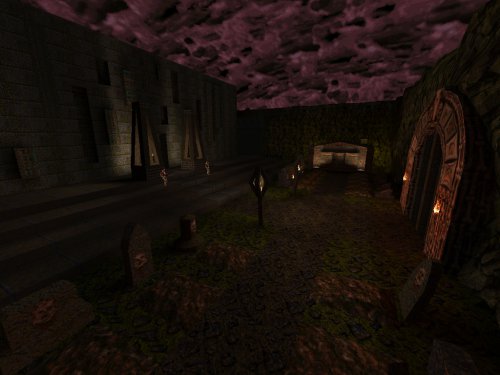 Small to medium-sized runic-style temple with a graveyard in rocky surroundings. The level can be finished fairly quickly, but in order to visit all areas and get better equipment it requires exploration and secret-hunting. The map source is included.

Note: This is an updated version that addresses several technical issues. The unfixed original version is available here.

Temple of Quake on The Quake Grave

Temple of Quake has some really good stuff going on! I really like the way it's laid out and some rooms look great, I like the trap used with the spikes (could use a little adjustment but it's a really cool idea) and there is great atmosphere in this one too. There is one big sticking point for me though and that is that this game sort of has a branching option. Normally not a big issue with maps, but this one just felt off to me.

I finished the map first through the big fight and saw that over half of the enemies were still alive. I found out that in the map, you can either go right to a big fight and end the level or you can try to find a gold key that will take you around another part of the level to the same exit. I like the idea of a branching path, but what I don't understand is why the gold key is so hard to find? I guess it's to add replay value to the map, which is fine. However, I can't help but wonder why you wouldn't want the player to see a big portion of your map unless they hunted hard for a key? And after the big fight, if you wanted to go back and explore what you might have missed, you'd actually have to start over to find the gold key.

It doesn't make the map unplayable or anything like that, it's perfectly fine, but I just don't really understand the logic behind gating a nice area of your map behind a hard to find gold key? Most players are going to not see that section of the map. I suppose this is for the secret hunters, as there are also 10 total secrets to find through out this map too, and it's not very big. Enjoy the secret finding! =)

Quite enjoyable, and recommended for those that like to explore.

It has many parts that look like a first map but they are well executed for the most of it. It hits the right spots on exploration, and the secrets, those i found at least, are well executed, except maybe one, that i think requires rocket jumping in an already quite harsh spot, and another that i don't get how i managed to open it.

On layout is good and in some parts it works very well more for the combats than for looks, and the traps add an extra good spice to it, even more in the big room. On the other side, is a bit cramped and hard to navigate in some parts.

Brushwork is a bit random: sometimes is overboard on the rockwork, too much as on many parts it would look better with less faces, and on others is good, even if a bit simple in composition. Some texturing need some fixing but it's OK, nothing infuriating here.

The combats are all enjoyable, but i would put some more health packs for skill 0 and 1, as its very common to be below 50 hp.

Thank you for the nice comments; I'm glad you've enjoyed it! Especially seeing ArrrCee's playthrough - someone ELSE actually playing the map and having fun - after having played/tested the map myself for the "millionth" time, gave me the best feeling of satisfaction during all these on and off months I've spent on the map!

During your playthrough you had the right idea about three (if I remember right) of the secrets; you would've only needed to change your approach a bit in each of them. ;) I admit that a couple of the secrets are kind of lame and require pretty much luck or WOLF3D tier wall-hugging stubborness. But as most of the map, even those secrets were partly inspired by the original id maps, which had their fair share of secrets that made at least me say something along the lines of "really man? Come on!" >:C

The point of the gold key branch is to reward the meticulous player who likes to explore. It's an arguably less deadly alternate route to the exit. But as you said, the map is probably more for the secret-hunting explorer type of people, who like to take their time. I guess I kind of unconsciously ended up making a map similar to my own playstyle, then. :D

Regarding Cocerello's review: Some parts were definitely thought of with a combat scenario in mind first and foremost. But you are so spot on about the overboard rockwork: I definitely spent an embarrasing/unnecessary amount of time on it! :D But regarding the rest of the brushwork, the original id (runic) maps were my primary inspiration, and in my opinion, they are quite similar in brush complexity. I'd be interested to know which textures you believe need fixing, because there's a good change I've become blind to my own approaches at some parts. :) And oh, Cocerello, no rocket jumping required. ;)

I quite enjoyed this, but found it frustrating that so much of the level was hidden behind secrets that I didn't spot -- so, despite killing everything I saw, I ended up finishing with less than half the kills. Lots of good ideas here, and I will look forward to seeing more from Esrael.

Oh, and: nail traps. No thanks. Not ever.

A great debut map with a bunch of interesting ideas. The temple looks good and the layout, with its branching paths, is something I'd love to see more often.

That said I'd make a couple criticisms--one is what Arrcee said, that having half of the map hidden in a secret limits it for most players. That wouldn't be a problem if the secret were relatively easy, but I found your secrets to be far tougher than usual.

The other is the contrast between the inside and outside parts of the map. Inside looks very E3, outside looks like it could be a part of any episode of the original game except E3. That's more a matter of personal taste than anything else, but I found it kind of jarring.

If you want to play this map in deathmatch or on Dark Places with realtime lighting, I've released an updated version of the map here.

Other very minor adjustments have also been made, but you should only really need to download the updated version if you fall under one of the two categories mentioned in the first paragraph.

More info on version 3 at func_msgboard.

I enjoyed ToQ the first time I played it, but after seeing the full map I find it even more impressive. Getting the gold key is insanely tough, though.

Pretty nice map, with good atmosphere and feeling. Nice secret hunting, too, but too many totally up-to-luck ones. Frustrating, especially since so much of the total kills rely on those.

(For example, RA secret would have benefitted from a small, visible lip from the wall. just to tell the player there was something there.)

Basically what everyone else just said. I found 7/10 secrets but no luck with the gold key yet, I'll keep searching.

Competent map, but more enjoyable for secret hunters than regular players. I had fun playing it for a second time following JMP's video after a somewhat frustrating first run where I missed over half of all secrets, including the gold key. I even slightly improved on his playthrough by finding all secrets (and a quasi-secret quad) without using grenade or rocket jumps, yay!