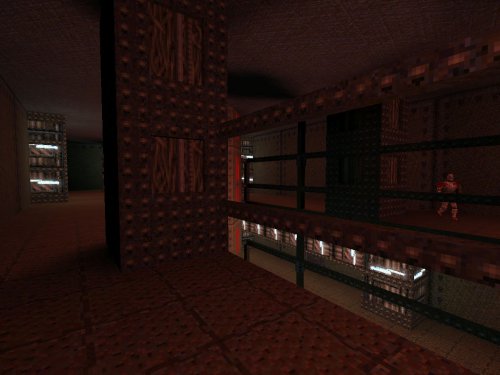 The Secrets of The Mansion

"Medium sized medieval and base map".

A thoroughly enjoyable map. The blend of texture styles, mainly base and medieval with some custom ones, works really well. The brushwork felt somewhat simple, and every now and then I noticed some textures that could've been aligned a little bit better, but I'm nitpicking here.

The map has some really clever mechanisms with destructible machinery, walls and floors, which made the map feel refreshingly dynamic. During my second playthrough, when I was hunting secrets, I noticed how at times there are multiple ways to get to places, which adds some cool nonlinearity to the table, and without breaking the map. The secrets are clever, fun and rewarding.

Item/health balance seems pretty good to me, although at times it felt like nails were a smidgen too plentiful.

Combat was varied, enjoyable and appropriately challenging. Perhaps the largest hiccup was the final fight, though, which was a bit anticlimactic and I could kill the monsters from the outside with the GL.

I wonder if this is nolcoz's first map, because for a first one it's an extremely good one! I'm kind of weighing whether to rate this 4 or 5/5, but considering modern map standards, the somewhat lacking final fight combined with brushwork and texturing that were missing just that little amount of polishing required for a 5/5 map, may just force me to rate this a 4/5, but a very solid one at that!

I'm giving this one a solid 4.0. The architecture is basic, but the gameplay is solid.

This map is fun. It has some issues (like some doors behave odd, have no sound, and/or have stretched textures), but that almost adds to its charm: it's a kooky map. Some texture combinations are peculiar, some brushwork is strange, wtf is the story, etc. ... all of this adds to the character. If you're a purist, stay the hell away. However, if you are more accepting of someone's creative interpretation then I'd say its definitely worth a download. Again, it was fun. I'll take fun over fancy aesthetics any day.