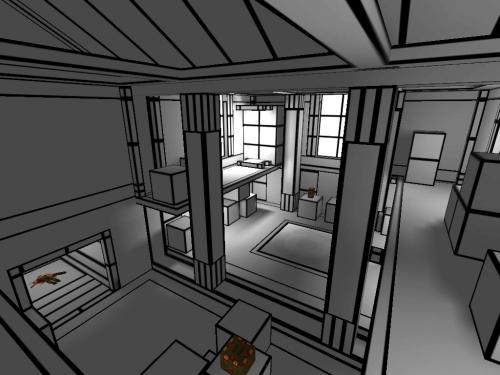 Medium sized base map with a unique concept: "keep the usual shapes but take away the textures." A biohazard outbreak at this facility adds lots of blood to the mostly white textures.
This file was repackaged by Spirit. You can find the original .zip in the trash

4/5 with 41 ratings
You can NOT add ratings
if you are not logged in.

Currently, one of the tags for this map is “play over looks”, and I strongly disagree with this description. This map is neither play over looks nor looks over play: it looks absolutely stunning (it put me in mind of the somewhat obscure ZPC) and the gameplay is spot-on.

Actually, it's not just a matter of gameplay, but of very clever use of stock monsters that take on a different meaning in this map, by virtue of their surroundings and the way they interact. And instead of throwing every monster in the Quake bestiary at the player, the author chose only monsters that make perfect sense in this setting: like the minimalist visuals, monster usage in this map is an exemplary exercise in restraint.

And then there is the alternate (real?) ending, which just adds a final bit of flair.

One nitpick is that the bloody writing on the white walls could have been made to look more realistic (as opposed to printed messages). There is also one other thing that bothers me, about which I would like to ask the author (if he ever comes across this comment of mine):

When the player enters the map, there are two tiny rooms off to the left. The floors here look messy compared to the rest of the map: there are several shadows on the floor that look all wrong. Is this a) intentional? The conceptual nature of the map made me think that it might be. b) simply due to technical limitations when you made the map? c) the result of incorrect rendering by the engine I used (DarkPlaces, latest version as of late 2013, with no fancy settings)?

Regardless of these two minor issues, this is an excellent map, with all-round originality and great execution.

Ok, I have just tested this map in Quakespasm and answered my own question -- it is indeed rendered incorrectly in DarkPlaces.

There are fished IN the wall... like they don't even care it's not water

Otherwise decent, it really has an underground lab feel to it despite it's almost completely white

Ah, so this is why those floor shadows look wonky in DarkPlaces.

I love weird/experimental things, so this is my cup of tea. The visuals remind me of a freeware game called Tempus Fugit, they're really cool. The gameplay is rather nice, with exploration and some nice secrets, and I love the writing on the walls. The combat is sometimes alright but most of the 86 enemies are zombies, and that gets a bit irritating. I really like the secrets, and the ending twist is pretty cool and strange. Overall, I recommend this. It looks interesting, has some nice secrets/exploration and has some nice combat here and there.

Anoxia on The Quake Grave

I can't really add much to what everyone has said above. It's pretty bad. I do like the skateboard ramps in the first room though! ;)

ignore my comment, or remove it, that was meant for another map! =/

This was a real treat. Final part is too easy to miss imho. Loved portal references.

Again with the unique style...that is what I like to see in Quake maps!

The screenshot alone should tell you what you are to expect in this level!

I thoroughly enjoyed this. Combat is nothing special, base enemies and zombies with a few extra fish, so it's very easy even on skill 2. Its Portal-like atmosphere called for a focus on puzzles rather than combat IMHO. What really draw me in was the unique design, even though it's not perfect: like Icant said, "hand" written bloody messages on the walls are very obviously NOT handwritten and some textures/decals don't blend seamlessly. The infighting scene between enforcers and zombies is pretty cool. The underground base part is a nice touch but it's too easy to miss/skip. Also, I find the whole map too short. I want more! If these issues had been resolved, this map would've earned a 5.

Also: Y'Rleh?!? Someone needs to study his Lovecraft...

I really liked the visuals; it's a nice break from the grime and gloom that is usually associated with Quake, and a good effort was made to keep things interesting using brushwork.

I can't say the same for the gameplay; I found myself wandering rather than progressing with a purpose, and in the end I simply wandered into the exit after only 3 or so minutes. Still, I enjoyed my brief time with the map and it definitely earns a few points for being so unique.

I loved this! The white walls are disconcerting, and then just when you get used to them, things are all Quake-y again. And I agree with Icantthinkofanickname's comments regarding the minimalist design. This one is a beauty!

As a I have played Warsow in the past, I really don't have anything against this texture style. Was a fun play!

I thought I'd played this before, but almost all of it was unfamiliar. I enjoyed the sense of narrative, but I can't help thinking it would be rather better with the regular textures. The coda below the main base was something of a relief, and the Portal-flavoured "This was a triumph" graffiti a welcome shared joke.

Interesting, but in the end it was a fairly standard base level with a gimmick.