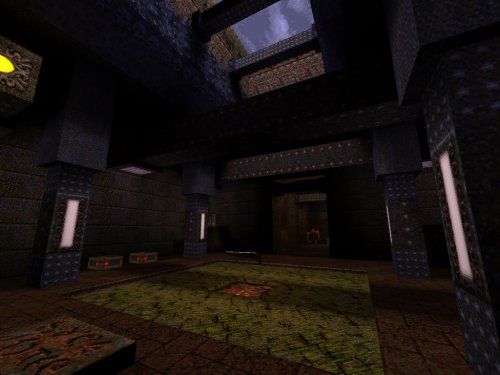 Note: This map requires an engine port with increased limits.

Overall, it is impressive for a first map, and impressive that he stayed motivated for such a long time to finish his first map.

Huge lenght, till the point i almost thought of it being endless, Id and probably too Unreal inspired brushwork, with lots of setpieces (i liked this approach, as it didn't make it easier to get lost like what usually happens in this cases), hectic, cramped and very repetitive combats, mainly linear and 2D layout but with plenty of exploration, varied side areas, and good underwater areas. and well done secrets.

It was a bit frustrating at first as it needs to be played in a certain way and died a few times but when i got the hang of it, it was fun and right my alley in several aspects, having some memorable moments. I like to use the GL to its strenghts and this time I had to all the time. At first was left puzzled at the lack of shells, but got accustomed fast as the ammo given was always useful, and the amount was always good and well placed, as I was most of times at full capacity on nails and explosives, but not too much. After i got accustomed to the ambushes i could go with more ease by being very cautious, expect plenty of damage and play each weapon by its strenghts.

XLarve's Dream on The Quake Grave

I'm not sure what the goal of this one was. Whether it was to create the biggest map possible or what, but XLarve's Dream (in a nutshell) was a map that ended up not being super fun for me to play.

In the map, you are faced with 500 and something enemies. Each room you enter has enemies in it as you enter, and about 90% of those rooms feature monsters that spawn in behind you, making it very difficult to react and finish a room on your first or some times second try. Some might argue that I am just not cut out for the difficulty in this map, and that may be true, but being ambushed and trapped in every room was repetitive and overall not very fun for me.

On top of that, I got lost in the twisting, winding areas of the map and had no idea where to go to finish the map after I hit the necessary buttons. I searched for a while and after an hour and half total play time, I ended up quitting the map and not finishing it because I just didn't have the drive to push on anymore.

I will say that the sheer size of this map is very impressive and some of the stuff that XLarve built in this map was nice. For example, I really liked the route to the gold key and how that all flowed. However, somewhere after that point the map seemed to meander. I think the map needed a little more direction, some fat cut off here and there and maybe even some testing done from some other players. Judging from this though, I think that XLarve has the potential to create something truly amazing in the future and I look forward to his next map, but I apologize, this map didn't do a whole lot for me. =/

(All kills, all secrets)

The size of the thing is impressive! Think AD, minus the crazy detailed brushwork. Other than that, I agree with ArrrCee.

https://www.youtube.com/watch?v=pkbG1o2PmkE&list=PLJhVJ4KYUgqlh2ZZoJJGEStn4wpUZU3Gx&index=14
map passed by author for 30 min - without any power-ups, show some secrets (where is the monsters)

Thanks for the walkthrough, but for me that only emphasizes how unfairly difficult your map is. You created the map, so you know where all the monsters are, when and where new monsters will teleport in, et cetera, and you still took serious damage in many of the combats.

I think the map's size is impressive, and the visuals are polished, but the combat is too hard (as mentioned) and too repetitive for me to enjoy it. Ditto the architecture--it's not bad, but there are too many rooms that look similar to one another.

I can't create new opinions here, but the comments have agreed to one consensus that XLarve's Dream is impressive. The size is very large in all levels because of the unusually high number of rooms, enemies, size and detail. The polished architecture is particularly interesting because it's looks distinct, especially for a metal-themed level. It is somehow less detailed than The Forgotten Sepulcher and might be just as big as that, but has more rooms and monsters than that. Unlike the relatively normal Sepulcher, the rooms in this map are so small and the combat's cramped that (as JMP and Cocerello pointed out) it's very hard, even with the long length coming into play.

Which leads to one issue I had with it: Backspawning. I'm comfortable when backspawning happens once, but this many is painful to deal with. However, I find every other part of the gameplay including the navigation and traps to be more easily tolerable. The difficulty's actually quite okay. What I'm also divided on is that it's repetitive and there's an over-abundance of ammo, but we'll leave it at that.

The map is unique, there aren't many similar ones to it. It has a share of issues, but thankfully they are small enough to not make it bad. This is average overall. A lot of potential is in here, so I'll anticipate XLarve's next map.

my tweet for maps progress https://twitter.com/xlarve2016?lang=en trying to keep in my mapping process...

The brushwork is really nice (especially for the first time), but there are too many rooms that look alike, and the player goes from one such room to the next. Also I think that some spacious halls would be nice, I hate fighting inside narrow corridors and using those corridors to progress. I also have to mention that the pathways to the next location are often hard to see right away, i. e. it is a narrow tight tunnel-like corridor somewhere around the corner. This is a really impressive level in terms of the size and architecture, but I got tired after about 100 kills, 'cause the surroundings look pretty much the same. Some towers, bridges and crossing walkways would more interest into the game.

Oh good, another ambush where vores teleport in ahead of me and behind me simultaneously. That never gets old. (Hint: it gets old immediately. It was born old.)

Well, I scored this map at a single star and gave up playing a few short of 100 kills. I knew one star was harsh for such a significant technical achievement, but I simply wasn't enjoying myself. The endless sequence of enter room, get ambushed by things teleporting behind you, was just no fun.

But then something odd happened. For whatever reason, I felt a compulsion to get up to the round 100 kills before quitting. And somehow the game drew me in. I think part of it is simply that the teleport-behind-you technique is used much less after the passage from 50 to 100 kills, and from there on the game plays fair. But it's probably also that I somehow slipped into the rhythm of a sequence of set-piece combats.

In the end I finished with 507 of 538 kills, and 5 of the 13 secrets. I still can't rate the map highly, for reasons I will get into in a moment; but i think three stars is fair.

Aside from the crazily excessive use of teleport-ambushes, the map's biggest flaw is that that it's so unvarying. There is very little to distinguish one area from another. That has the practical drawback that it's easy to get lost, but also the psychological drawback that there's no real sense of progression other than watching the kill-count rack up. I never felt I was getting anywhere. It's just corridor after corridor. At one stage there is a mildly interesting diversion to get the gold key: but then once you use it, and open the GK door, all that greets you on other side is more of the same.

On the positive side, there is a real sense of claustrophobia that builds, heightened by the occasional glimpses of far-off sky through vents. That's done really well. But it makes the ending terribly claustrophobic. Surely the ay the level should end is with finally making it outside the labyrinth into daylight. Instead, there is a fairly easy combat in one more room much like all the others, then you walk onto a teleport-arrival pad and it's all over.

There's lots of good technique on show in xlarve's dream -- enough to make my confident that this mapper can go on to much better things. But the whole experience is dreadfully let down by the lack of any sense of narrative. I'll look for better (if not necessarily bigger!) things from xlarve in future.

Completely frustrating. Being trapped between a lot of monsters, including Mother Spiders in a small room without any way to avoid the attacks ruined the entire map.

Finished it in about 100 minutes. Quite literally a memorable experience. An interesting exercise in minimalism, physical scale aside.

Killed 430 out of 532, im totally stuck, after 65 min going to every room,umpteen times, back tracking a zillion times, trying to look for any secret, any hidden switch, bla bla bla, all enemy are dead, im just walking around empty corridors and rooms,secret corridors ive had enough, im better off walking into a room full of covid people. At least then i know whats going to happen.

@Ninja - Coming out of the water hole where you're backtracking from the grotto where the door slowly reveals a vore called Shalrath, take a left up the stairs to the bloody demon face, do a 180 and go thru the hallway with the fluorescent lights and the 2 square lava grates in the floor, take a right and go all the way across the long lava grate, then turn right and go toward the bloody demon face at the end of the hall.

Things I liked: Level felt really polished and well-designed, plenty of ammo, plenty of challenge, secrets were tough without being too difficult to find.

Things I disliked: Battles felt same-y after a while; maze had me spinning my wheels a couple of times.

I thought the cramped style added to challenge: Choosing the wrong weapon for a battle would get you killed fast. I blew myself up underwater because I used the grenade launcher on a rotfish that ambushed me! I liked how it upped the challenge by forcing you to use the grenade launcher instead of the shotgun due to a lack of shotgun ammo early on.