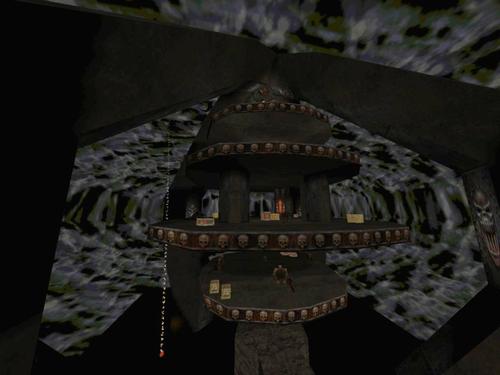 100 Brush Competition (rules: Q1 map with 100 brushes at most) - organized by Aardappel:

Ouverture by Gilt - 2/5 Reminds me of MDK so that was nice.

Stamppot by Zippie - 2/5 Scoring a heart for the mind twisting sideways teleport...what the...!?!? This made the mappack worth it alone, never new you could teleport sideways and then have your head all screwed up. Wonky!

Minimal Devastation by DaMaul - 4/5 Complete with Chthon and lava and everything!

Abject Abscess by Paul J. Brosche (Palldjon) - 2/5 Interesting reuse of areas. The map basically redesigns it self at the end which is pretty inventive.

Periwinkle Paranoia - by Noel Lacaillade aka Edgecrusher - 3/5 Fun horde fighting. 3 Monsters were found to be imbedded in a wall...? Fun overall, great for infighting!

Diez Equis - by Fern - 2/5 Okay but really really tiny. Design is nice though.

Cliffside Carnage by Killazonetherun - 4/5 Fun! Loved the cliffs at the beginning for the infighting. Wide enough to strafe-n-bait the monsters to fight each other. End was awful. Design was awful. The fact that quake is so flexible as to be fun in such an ugly map is a testament to it's lasting this long!

Shadows by Killazontherun - 1/5 Impossible. As I always always play EVERY map on Nightmare, this map was simply impossibly setup. 3 Shamblers to far away to get into a smash frenzy, not enough ammo for all the monsters, and impossibly cramped quarters, then throw in a vore. HOW???? Design of the beginning room was like MDK so it's almost worth starting it...almost. Awful.

Interesting to play but some maps were just down right bland or boring.

Interesting to play but some maps were just down right bland or boring.

Personally, I don't think you guys have rated this fairly. It's a contest, after all... not all of the maps are going to be brilliant. And I loved all of the top three; my only complaint is that they were all too short.

Enjoyed playing through this one. Took me a few days. Last map was most tough. Loved the underwater acid area.