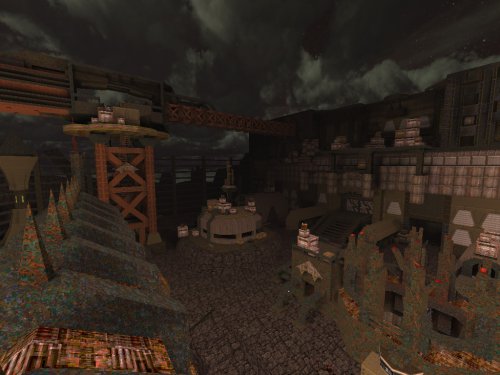 Huge nonlinear IKbase level with over 900 enemies. The map source is included.

Note: This map requires Arcane Dimensions and a source port with increased limits and BSP2 support.

A tremendous map in every respect. Right up there with Rubicon Rumble Pack/AD maps in terms of just being a huge fuckoff base, though the detailing is maybe closer to Travail. Combat is dense and sometimes even brutal (some might say "grindy") on skill 2, keeping me in the red for a lot of my playtime, so be prepared. Also be prepared for a huge time investment. The map may not have the real estate of a Ter Shibboleth but it will take time to explore. There's plenty of distinctive areas and an organic sense of exploratory and sometime secret-like progression, so it's catnip for mapcrawlers. I completed it in 140 minutes, with only 13/37 secrets and 823/925 kills (!).

Definitely one of my favorite maps in recent times.

How many seekers does a map need? :) I really doubted I would be able to finish this, and I'll probably revisit it when I've recovered. Getting all secrets and all kills seems overly ambitious though, I'm not sure I can manage to find enough ammo.

Damn, I just finished this in 142 minutes and got about 85% of the stuff. This is like the Forgotten Sepulcher of Base maps. It has everything! Great story, great set pieces, loads of secrets, good visuals and the gameplay is pretty fun. The ending is really excellent too considering it's just a single map. You get invested in the whole story of the place from logs scattered around, then it pays off. I found it more immersive than most other maps.

The sense of scale is probably the best I have seen in Quake for ages. Not just because it's huge, but because of the way it gradually progresses. You see previously visited areas underneath brand new areas, it really gives the sense of being in a tangible space. Yunno, "oh my, that's the place where I was 15 minutes ago" kind of shit.

The only thing I might fault is the visuals in some areas later on, they look a bit 90's (areas lit too brightly with few coloured lights, repetitive texture work etc). Hardly a bad complaint, Quake is from 1996. I'm just spoilt by the really modern look of Sepulcher/AD/xmasjam2018 etc.

Could it be, could it be, could it possibly be ... a base map better than Telefragged? It might be! I've played that one four or five times, so I know it like an old friend, whereas I've only played 37th Relic Retrieval once, so I'm not quite ready to call it, but it just might be! At any rate, definitely one of the two all-time best base maps, and putting it ahead of the other two in RRP (A Locust in August and Ceci N'est Pas un Pipe) is really saying something.

It's not merely huge, it's a huge place, where it feels like real work is going on and where all the various secret routes open up new ways to old places. The only map I've ever played that comes close to the same feeling of actual exploration is Sock's Hordes of Zendar.

Absolutely top drawer in every respect: map, detail, progression, and — most of all — the brutal but fair gameplay.

One quibble: I didn't enjoy the various monsters' invulnerability to explosives. For me, that added nothing, and made a useful weapon much less useful. As a result, I played almost the whole level with the SNG and the two shotguns, which is a slight loss.

This is hands down one of my favourite maps. Very atmospheric, very challenging (maybe too challenging at the end, I died at least 12 times there) but mostly fair. Very interesting and well thought out layout. I love how non-linear it is and how you'll constantly open up new routes to where you need to be. I love the story. It does the data-logs thing quite well.

Will definitely be playing anything Mazu releases in the future.

Map is way to big and confusing, lost count how many times i got lost, couldnt find my way back, to where i got lost.Completed all on skill 3.But no fun doing it. It was a chor in the the end.

Just to say I've played this twice more since my initial review, and loved it both times — maybe even more than the first time. The whole thing is just magnificent, and close to flawless.

Is it just me, or using shotguns cause a slight hiccup when the pellets hit their target? Haven't noticed this on small maps such as ad_chapters, so it might be my system? Using Quakespasm Spiked and vanilla particles.

Skill 3 nightmare 982 kills so far,havnt had time for secrets, to busy being killed every 20 seconds lol most brutal map ever,on nightmare 3 slugs from anyone,and your dead lol

What a piece of art!

In the silver key section, I dropped to the slime room and pressed a button that prompted the message "lift now active", but I couldn't find any lift or any other way out, so I was stuck there. Did I miss something?

Also, I didn't like that so many enemies were invulnerable to grenades, as Mike mentioned.

Not much else to complain about. This is one hell of a map. Play it now.

I have not completed this map. Infact, I have not even perhaps begun it properly - relatively speaking; minding how humongous it is, if to only assume just by the monster count, which nears to one thousand.

The map, has an old school vibe to it - some love it, some prefer the newer, more modern wave. Gusta.

Speaking of which, the map, does feel like a 'Quoth'-based project, more than an 'Arcane Dimensions' one. This, possibly for the choice of assets and themes. Good, though, that you have chosen the 'Arcane Dimensions' base of content over the 'Quoth'; for the first one, appears more doable in terms of heavy difficulty spikes you like to employ.

The map is abundant in sharp ambushes; the difficulty level intelligence of design, is impressive, if not downright overwhelming at times. Fine combo with the drones shooting from uphigh and the guard dogs attacking in the meantime on the ground. I do not like the toxic warfare units, though.

Why did I not complete this map?

The "37th Relic Retrieval", unfortunately, encapsulates what is typically considered bad in the "base" themed maps. Bland colourtones without having much contrast included anywhere, melding together in the mind of an observer to form a rather unfulfilling impression of a maze, where any pointers - in time - become meaningless. Synergized with brutal and unforgiving fights within tight spaces - or becoming overwhelmed in somewhat more open areas - it just all becomes one, lingering struggle, without the promise of anything else but more of the same struggle, especially if to remind oneself of the high monster count.

If one simply does not enjoy it for what it is, nor has any other motivation to go for, one quits it.

Kind of ironic, though, to say all that, for myself.

Wow. I didn't expect THAT. The fully fleshed story. I didn't do all the secrets so I am 12/37 and 559/678 kills, so I suppose I missed some story bits. Nevertheless I found enough notes to clearly understand what happened in the end. The best stand-alone I ever played. Some episode like Dwell go better but ONLY due to being episodes. As a solo map it Number 1 for me personally. Astonishing. Like a little game. I wish it could be sellable so I could buy and recommend. THANK YOU sir, you amused me and a lot

PS. I have to admit on some battles I had to "god" because it was way too unbeatable on Normal which was like a Nightmare to me. For example that underwater sequence was unbeatable, I mean that final part with machines and those flying drones. Or in the room with slipgates and some flying guy with LOTS of health... etc.

By the way what is IK in IKbase?

@Alex Ros: it stands for "Iikka "Fingers" Keränen" - a mapper/artist from Finland, you can search for his maps here. He also created two (maybe more, but I remember two) maps for Q3A and perhaps some for Q2 as well. He later went to work for Valve, and still is there. Back in the Q1 days, not only his maps were good, but he also created a few of texture sets, namely ikbase and also ikblue.

how to play the game?? What is the map name?

3/5. I love huge maps that absorb you in their atmosphere. This is well brushed, architecture is good, clearly, many an evening spent building this leviathan of a map. So why such a low score? It suffers from the one problem that around half of all the maps here suffer from ... poor progression. Only in this map, this flaw is taken to a new level. Gameplay is so non intuitive, so poorly thought out that it is almost unplayable. Almost. You can if you are happy spending most of your time lost in empty corridors going round and round in circles juping up on boxes most of which do nothing and some of which are critical to the game and just bumping into what you were supposed to find. Many promising corridors are just dead ends leading to a box of ammo. Worst of all, plenty of "helpful" arrows point in two different directions at the same time!!!?! TWO. Really. Yes thanks for that - really clear and helpful. With the effort put into mapping this behemoth, would it really have been that much more of an effort getting the arrows to change contextually? Getting lost in a map of this size is non trivial. Also this map is a notch above the stated difficulty which is a sore point. If it's nightmare, please call it nightmare and not hard. That being said, it is doable on 2, though not really as much fun as a properly balanced level though to be fair, other maps here do this particular flaw much worse - some of the fights are good though personally, I prefer more varied battle. A few quads here and there would not have hurt, they are easily the most underused powerup in quake mapping. I know that 3 is harsh given the qualities of this level but some flaws are so bad as to completely disqualify everything else and given the glowing reviews, I think a balanced opinion by way of devil's advocate is warrented. IMO, of course.