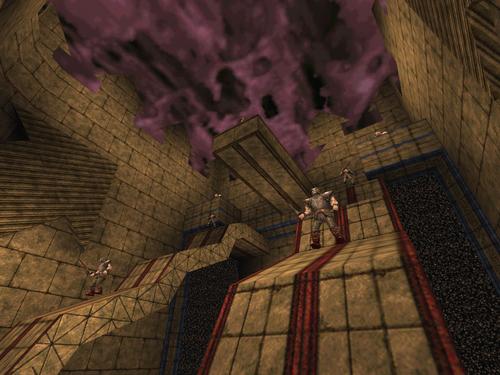 Results of the 2007 Vertical map event at Func_Msgboard. According to the rules all brushwork and entities remain within a 768*768 unit base with unlimited vertical height, the maps make no use of player teleportation, support singleplayer and are based on Quoth.

User Rating: 3.7/5 with 21 ratings
You can NOT add ratings if you are not logged in.
Drew 15 August 2012, 15:24
Lurker wins this one with his surprisingly well rounded and Quakey(if visually unimpressive) offering.

i found trinca's to be the most difficult. i didn't run into any bug in trinca's map. however, using fitzquake mark V, when my levels load for the first time, the textures & lighting are 'wack-a-doo' until i reload the level. this seems true for any mod i've played. fitzquake085 doesn't have this problem for me.

Thoroughly enjoyed Lurker's map, especially the insane shambler/vore finale. I'd rate it 4* on its own. I'll rate the pack as a whole after I've finished the other maps.

"A well-hidden button will open this", says Spirit's map. But I can't find it, and button-hunting is not a lot of fun. (My take is that this is fine for finding a secret, but not for main-line progression.)

Anyone know where it is?

MikeTaylor -- encrypted with ROT-13 so as to avoid spoilers (decrypter here):

Many thanks for this hint.

Having now completed the level, I have to say I love it. Aside from the frustration over finding the button, I'd rank this as 4.5*

Now completed 768rudl, too -- _Tower of Droles -- and it's another winner. Really tough combats, even on medium, but not unfair. You can generally figure out a way to get the advantage, and there is -- just -- enough ammo. That one would be another 4/5.

Might as well post my thoughts on these maps (which I wrote down when I played them a long while ago but then for some reason never posted):

Nice ideas all around, although each of the maps falls short of being truly great. Lurker's map is probably the winner for me, although it does feature a rising platform which does not seem to give you a second chance (if you step off, you're stuck), and the sequence with the knights on pillars made little sense (then again, I am not sure that went as intended, so perhaps it was an engine/compatibility issue). Rudl's map is nice; Trinca's was a bit too predictable.

All three of the above-mentioned maps are over too soon though, as progression is too fast. Spirit's map is the most successful in this respect, as it makes progression a little more challenging and varied (and it is the map I enjoyed the most, although I think Lurker's map is a little better). I do think that button is too well-hidden, and the final area was something of a let-down.

One thing that bothered me a lot -- although it's not directly connected with the maps themselves -- is Trinca's readme, which features a joke/implied justification of rape. Perhaps it's a language issue (I realise English is not Trinca's first language), but still -- that sort of thing is unacceptable.

I really liked the ending to Spirit's level: the final room felt like a puzzle rather than the usual throw-everything-in-together horde combat.

I mostly enjoyed my time with this pack, the limitations imposed lent themselves well to small, intense arena fights and definite "stages" to levels, which created a feeling to the maps that was quite unlike your standard Quake fare.

One thing that I can't say I enjoyed was the platforming elements that some maps employed. I found myself feeling stuck and frustrated at several points on 5th's map, in particular. In fact, generally movement was an issue. Negke's map struggled at times with ramps and stairs, which have a tendency to snag the player more than usual (Perhaps relating more to the curvature than the steepness). Still, considering the limitations imposed, it makes sense for mappers to encourage fine-detailed movement, even if it isn't always a good fit for the game.

Negke doesn't have a map in this pack!

I replayed Lurker's map and especially enjoyed two things that I neglected to mention before: the awesome title, Schismatic Ablation; and the four-rune special secret that makes the finale so much easier. Nice work!

Replayed Rudl's Tower of Droles. Wow, that map is tough. I was constantly on the verge of running out of ammo, and several times down to single-digits health. And that was only on Hard!

Replayed Spirit's transdimensional clusterfuck, only to have to re-read Icantthinkofanickname's encoded hint again, because I could neither remember where the secret button was, nor re-find it. D'oh!

Finally, replayed Trinca's Tower of Knowledge -- also a challenging map, especially early on when you're in danger of running out of ammo. All in all, this is a satisfying pack.

Lurker's entry firmly resides in my top 10 list of Q1SPs.

Played on skill 2. Lurker and Spirit have awesome titles, the other two are a little uninspired in this matter.

Lurker: A weird, surreal but not quite aesthetically pleasing map (a bit blocky, particularly in these outdoors rocky areas), from what I've seen - yes, because I'm stuck about halfway through, after grabbing the LG in the dark room. I can see a door up above but can't seem to find a way to reach it. If others have a clue, please share. ?/5

Rudl: Textures are about as ugly as they come, with the added bonus of fullbright pixels, yay! The mix of medieval and tech isn't particularly well blended either. Coming in from AD, the Quoth droles now seem like a walk in the park in comparison, with their sloooooow fireballs. That said, combat is solid and it's quite exhilarating to [SPOILER] manoeuvre around 3 shamblers in a cramped room (including accidentally landing on the head of the first one!) and find the goodies to fight them at the bottom, well guarded by another pack of droles for which I just picked up the RL. [END SPOILER] That was great gameplay design! And I found the ammo supply just right. You just need to not spray bullets around. Looks 2/5, gameplay 4/5, total 3/5.

Spirit: Hands down my favorite of the pack! I just can't get enough of these gorgeous egyptian textures (which is partly why I'm super pumped for the upcoming retro jam 6, BTW). Architecture is great with interesting platformy elements that, coupled with the egyptian theme, give it a somewhat Tomb Raideresque feel. Combat is good, with the added bonus of a nice monster infighting scene - these are always a treat to watch. The final ogre boss was a bit confusing, he should've had a different texture (and maybe larger size?) to differentiate him from the normal ogres. The mapper's signature INSIDE the actual map feels weird and breaks immersion, a shame for this otherwise exquisitely designed map. Side note: I had no problem at all finding that "well hidden" button. 4/5

Trinca: The toughest map of the lot, right from the get-go: I finished those first 2 death guards coming from the upper floor with exactly 1 shell left and a rather scorched ass! Thankfully, the layout occasionally lets you take the higher ground to blast the baddies safely from above. The somewhat cramped final arena is a real challenge, but not unfair, and I finished it with a little less than 30 HP/armor. Visual design is decent enough, but with rather blocky furniture. The second secret (YA) is very hard to reach, it probably requires some advanced trick jumping but I couldn't figure it out and I'd very much like to know how others do it. 3.5/5

All in all, a pretty decent map pack that I'll surely come back to, to finish Lurker's map and replay at least some of them. Provisional rating: 3/5, will reconsider it once I know how to continue that one very confusing map.

BTW, Spirit's map tries to load a Fondrian skybox, sadly not included in the pack. Anyone knows where to grab it?

These maps were not that enjoyable. I found myself going through most maps saying was "this done as a joke" (example 768 spirit)? Tower of knowledge was well designed and overall the best out of the four.

These maps were not that enjoyable. I found myself going through most maps saying was "this done as a joke" (example 768 spirit)? Tower of knowledge was well designed and overall the best out of the four.

I cant pass Rudl's map. I stucked in first room. It needs special mod or port?

Vasya shkolnik: These maps all need Quoth (and won't work properly without it).