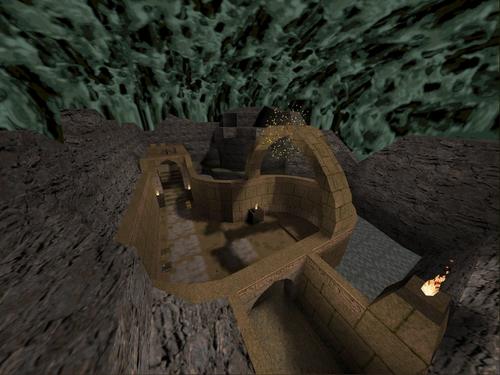 
Samus Aran 19 October 2009, 12:16
This map is completely broken on co-op mode. You start in a skybox and then are teleported to the main level, and even if you noclip past this, just before the end of the level there is an important trigger that requires a weapon to be removed, which it can't on co-op, so you're left in an empty arena with nobody to fight.

A great single player map with beautiful architecture and well thought out secrets and structure. 5/5.
hkBattousai 23 April 2012, 9:29
How do I impress the A3 switch?
Cocerello Registered 11 September 2012, 17:41
Average to nice map, with some curious and original architecture and average layout. Gameplay is good and ID like, difficulty like ID episodes too or lower, but that amount of ammo, health, and armor is wasted. Secrets are obvious but OK.

The last fight was very original and interesting, i liked it.
Icantthinkofanickname★ Registered 8 February 2014, 14:49

Beautifully made, but fairly linear and overly easy gameplay keeps it from being truly memorable to me. I agree (more or less) with Cocerello on all points. 3 plus.

Samus Aran: Well, the included text file does clearly state that co-op is not supported.

I've played through this a few times, but somehow it never stick in my memory, so that I had to play it yet again to remind myself which one it was. I would rate it as competent but uninspiring. Also, the ammunition is way too plentiful (which I admit is much less bad than the opposite failing!)

Technically this is outstanding, considering date of release. But it has its "i wouldn´t call it flaws". And a bit easy it is. But still a great one!

One of my favourites. The visuals are beautiful and so is the gameplay. The combat is tight and rewarding, the ammo/health distribution is just right and I love the cryptic hints. The atmosphere is great as well, and it also has awesome secrets. I didn't enjoy the very last battle though. The start of it with the ogres/knights was good, but at the end you're stuck in a tiny cramped room with a bunch of ogres. Then they teleport a Shambler in. Ah well, still one of my favourite maps, I recommend it to everybody.

Re-rated it after playing it again. Brushwork is way better than what i remembered and way better than in DoE expansion, not in detail, but in execution and coherence, taking into account the year. Gameplay stands out with some moments of good placement and choice of enemies while still considering it a bit easy mainly because of some other enemy's placement and overloading of ammo, weapons and room to move. Good trick also with the effects on the Gold Key.

I would like to know why in the last room the corpses make a weird movement when the the first brushes move down, i remember seeing it too when i played it two years ago.

Agreed with Cocerello 100%. Great map for a quick play.

Fun little map, although for how generous it is with ammunition i did occasionally find myself running quite low on health and certain types (shells, anyone?). I quite enjoyed the various arena combats, the end of the map especially was quite an intimidating challenge.

Not bad, but nothing to write home about. A little on the easy side.

Not bad - love the emerald sky and rustic architecture. At the end, it isn't entirely obvious (but mostly) that there's a trigger in the floor that lowers - it looks like an obvious trap or even a dead end (If you aren't on it when it lowers).

There's no point in repeating the criticisms made by the others, so what's left to say? Those who have played Ambush Keen Pilgrims will recognize the similar architectural style but that's about the only thing these two maps have in common: whereas AKP was extremely tough and very cheap on ammo, The Journey Home is the exact opposite, and somewhat of a nailfest as well - some more variety in weapons would've been nice. Just out of curiosity, I counted the remaining nail ammo boxes after finishing on skill 2: 12!! Times 50 equals 600 unused nails... A middle ground for both of those would've been preferable.

Like in AKP, architecture is very distinctive but not egyptian one bit (rather a mix of roman and gothic shapes) and though I like both the architecture and the egyptian textures, they don't really match each other.

The final arena progressively shrinking was an interesting idea but its final stage was much too cramped.

Despite its many flaws, I still found this map very pleasant to play.

Something very odd happened: at the end of the map, I was left with 4 remaining frags but no enemy left in sight. Noclipping out of the map, I found a black box with 4 enforcers who never teleported in. After killing them, frag count exceeded the total by 2... WTF?! And that's with the fish count bug fix on...

Simple quick map, great speedrun potential as per The Shambler.