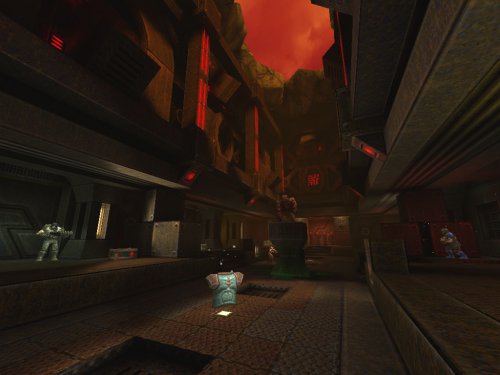 Small base map using Speedbase textures. Comes with a new skybox and a custom music track.

A lot of action packed into a small package. I loved it! Can't really find any faults with this one. The only thing that threw me off was the note saying this map requires AD 1.7.1. Thought I had to download the 1.71 patch to play the map so I created a new folder in the Quake dir called ad171 and went from there. Could not get it working though. So i just used 1.7 and it worked just fine. Don't know if I'm just a dummy and never needed the patch as it is included with 1.7final or if I was simply doing something wrong. I'm certainly no expert on this subject.

Excellent work. A cool twist on the base map, this one has an atmosphere all its own.

This is a lovely example of how a medium-sized base map can be so much more satisfying with the use of Arcane Dimensions. Progression is interesting and the ambush combats are signalled so that you can make plans before summoning all the bad guys. All in all, a fine bite-sized chunk of Quakish goodness. It looks like this is Comrade Beep's first standalone map, so let's hope there are plenty more to come!

Very nice. One of those maps where the encounters just keeping popping up and pushing you along... feels like a roller coaster!

A great little map. Comrade Beep has defined base maps in his own way, atmosphere and all. It's all about that base!

Can't add much, it's a great stylish little action-packed AD base map. Also, I'm not normally the type to get excited about skyboxes, but this map has a great skybox.

There is a reason as to why does the "Arcane Dimensions" have a perfect score on the "Quaddicted" website, as well as to why has it achieved a "mod of a year 2020" achievement on the "MODdb" website - two very popular portals, each in own regard, for gaming underground communities.

"Arcane Dimensions" does couple of things very right and these are rather major traits: it does the combat right - the hitscan element, outside of few exceptions, kills it for me in the original 'Quake'. "Arcane Dimensions" looks most right, making proper use of available technological advancements, as well as having own custom, visually upgraded array of assets. It sounds right. It has own, distinct, recognizable style and flavour; which some may like, some doubt - but it is there notwithstanding. Last but not least, "Arcane Dimensions" has a dedicated group of followers and developers, updating it and pressing forward. It is one of the - if not the very one - most popular mod, a base of assets and a map pack, all put together.

That is why, I think, it does make sense to build even the "base" themed maps around an otherwise rather fantasy-mythical inspired "Arcane Dimensions" pillar; even if it unnecessarily could fit more demanding, bitter tastes.

"Deep Research" is a proper map; not a brilliant one, but a good one for certain. It is combat heavy, tight in terms of spatial design, filled with challenging combat scenarios. The biggest thing to it, though, is that it rides the wagon of "Arcane Dimensions", which works as a leverage up. Otherwise, just good, against the contemporary standards.