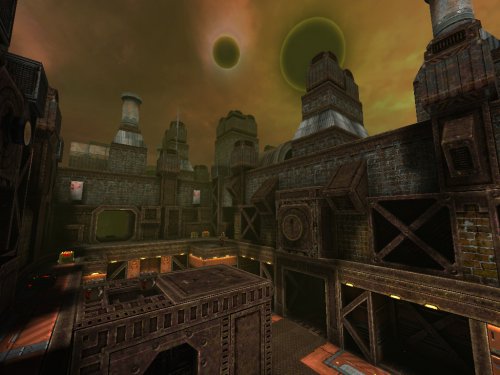 Medium-sized industrial facility using cr8 and Doom 3 textures. It comes with a custom skybox and a music track.

Interesting take on Nightmare mode which kept me on the edge. I managed however while finding only 2/6 secrets and not being as careful as I should have been.

Solid map from start to finish. Looks great, plays great. Finished on Nightmare with 5/6 secrets and I needed every healthpack, haha.

Same as beep1m2, but more intense. Very cool map, some secrets are still too easy same as beep1m1, but really? who cares, it's mainly gameplay we're talking about and I'll give my high five for that.

The map goes properly with "Arcane Dimensions" style - it is grand enough in scale, feels spectacular, has pleasant outlook to it. But there is something unlike about it, if to consider that perhaps - or perhaps not - it attempts to captivate the 'Doom 3' kind of vibe; even though such an assumption, could be mistaken. There is indeed a 'Doom' vibe in this map, but it is not the vibe of 'Doom 3'.

The aesthetics, appear like they belong to a known, distinct genre, the name or pattern of which, I frankly do not know. Perhaps a bit of steampunk, maybe?

I like the idea of no-medkit gameplay on harder difficulty levels - with medkits, available as secrets only. I like how the secrets were placed - they were announced, but finding how to unlock them, was up to the player.

The soundscape in "The Lima Project", was amazing. The spatial design - which I would call semi-open - allowed for aspects of non-linearity in approach to combat.

For the "Arcane Dimensions" style, I like the projectile based combat system better than the regular hitscan counterpart. Infact, I like it a lot better.

Beautiful map! Ive been revisiting Quake 2 recently and what a contrast this makes! I also felt there was more than a hint of steampunk in this. A joy to roam around and enjoy the views, great work Comrade!