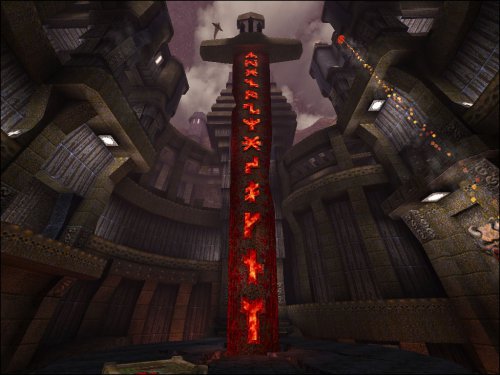 Large runic fortress built around a huge sword thrust into the ground. The map source is included.

Note: This map requires Arcane Dimensions 1.71 and a source port with increased limits.

What to say? Yet another Sock masterpiece! Solid gameplay articulated around the pictured central setpiece and stunning visuals, as always. Not playing this is a crime against Quake!

Yep, great map. Nice execution of the theme, with a nice vertical layout featuring plenty of obscure or hidden little areas, not all of which are marked as secrets. There are also some alternate routes which make for good replayability, and reminds me of classic id maps like e1m2, as well as previous sock maps.

A masterpiece! Still trying to get through it, but it couldn't disappoint me if it ended now, it's already been that good.

... finished it! Found 8 of 10 secrets, though I think his counting is off... there's quite a lot of this map that is "secret" and might not even be necessary to visit to win. Beautiful, intricate, and just deadly enough... perfect. If I could give more than a 5 I would.

This level essentially consists of two halves. First half is everything reachable before going through the silver door, second half is everything after. Thing is, said first half is a direct spiritual sequel to the same author's Midnight Stalker in how tight, combat/platforming-heavy and up to the point that part of the level is, and is probably the best, gameplay-wise, creation of his, up to date. Moreover, despite being an AD-based level, first half's content manages to stay remarkably classy both in its look (barring the central sword vista) and its play, especially if one switches to classic implementation of shotguns and plays from Mark V WinQuake for software look. Anyway, the author really seems to be having a blast remixing, or rather reimagining American McGee's works, if one goes purely by these one and a half levels, and I really hope to see some future levels of his made in a similar sensible, to an extent, completely no-nonsense style. After the silver door, however, the level's consistency, in every possible regard, starts to very noticeably waver, and to gravitate towards the usual meandering Zendar-ish author's style, the more, the closer to end. Truth be told, I would personally just recommend dropping this level immediately after said silver door (making sure to find and complete the optional area prior to it!) not to sully the overall impression, or at least to treat it as an entirely different level altogether. Anyway, I personally rate the first half as, ah hell, 9 out of 10, while I can only rate the level as a whole, at 6.5 out of 10 at best. Also, author's thoughts on American McGee's dm4, which was the main inspiration behind this level - or rather said first half of it - were a very entertaining and illuminating read. They can be found at the section of author's homepage, dedicated to this map.

Ok, I completed the sequence. Now what?

Absolutely wonderful architecture and textures. Colors are also on point and contrast nicely. This is a must-play and ought to become an official part of AD.

I think the was the most enjoyable map I've ever played in Quake. This is in a class all by itself.

Absolutely loved this: it hits all my high points: brutal AD-style combat, and lots of it; non-linear exploration with lots of optional paths; delicious secrets including lots on the rooftops. It's clear five stars, and ranks among my very favourite maps for sheer quality — though others that match the quality and beat it for quantity still have the edge! Sock may be the single most consistently brilliant of all our mappers ... and that's saying a lot.

the best design in any Quake map, ever. absolutely huge. it almost feels like dare I say it, Lordran. Tons of fun to play and a great challenge. Grendel's Blade is required playing for anyone reading this.

Truly awesome. The encounters are challenging but always fair, and the map pushes you to find all the secrets. They're worth it, too!

Brilliant fun. Love the fact that Quad runs are the star of the show.

Some minor issues here and there but a great map overall. The only reason I'm not rating this a 5 is ... well, I've played Leptis Magna and Firetop Mountain before that :-)

Despite these (again, minor) issues, the map is a wonderful effort and I can't wait for his next work. I wish it were larger, but I guess sock can't reasonably be expected to spew out Forgotten Sepulchers all the time. If you're having trouble finding all the secrets, sock provides hints on a dedicated page. The secret count is not "off", as some secrets are intentionally unmarked.

I love those map-explication data dumps that sock generates.

one of the best maps i ever played

I've replayed this a couple of times since posting my initial review, and Grendel's Keep does not disappoint. So much fun!

The best level ever made for Quake. Perfect in almost every way. How anyone can give this less than a perfect score is beyond me.

Rated 4/5 because I've spent too much time figuring out where the hell should I come next, then jumped from top to sth like secret what turned out to be a main path. Found 8/10 secrets, but never found last 5 runes. Too much of backtracking, but nevertheless map looks top.

I've replayed this map at least 10 times now, and it's still a blast every time! Even after replaying so many times, it's never too easy. And, it was not unfairly hard on the first play. It's the perfect balance of combat, exploration, and eye-candy. Just a monumentally good map! A must-play for sure, you won't be disappointed!

One of my favs all time. THANKS