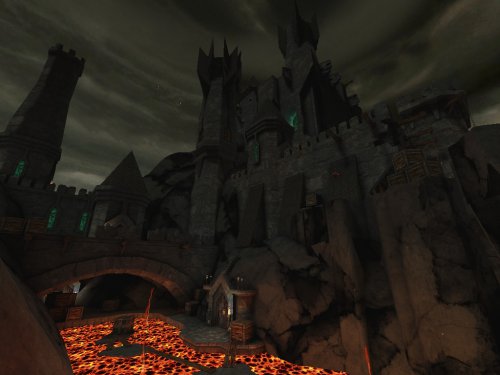 Huge lava fortress using custom textures by Makkon. It comes with a few new sounds, a custom skybox and a music track. The map source is included.

Note: This map requires Arcane Dimensions 1.7 and a source port with increased limits + BSP2 support
[The new sound effects may not work on case-sensitive operating systems]

could be called the crucible for its difficulty. sprawling, distinct zones. memorable map. recommended.

Absolutely Awesome on every level! Can't say enough good of this! (Actually, I'd have preferred a more evocative name... but you can't have everything, I guess)

Missing a bunch of sounds... is there something else I should have downloaded?

You're on Linux, right? You'll need to rename the sound/MarkieV1 directory to be all lowercase.

negke: not exactly, because Heresy mixed a few different "spellings". If Solomoriah renames it to markiev1, additional links for Markiev1 (lowercase v) and MarkieV1 (uppercase v) will also be needed. I don't know if mappers have a tool to postprocess their maps and fix those kind of errors automatically. It would be very easy to code and they wouldn't need to worry about that while doing their actual mapping work.

I absolutely loved this map, although one of the puzzles worried me. I had just quit on two of Smilecythe's maps because of speedy puzzles that are really not my thing and I hope this doesn't become the next Quake trend, it absolutely ruins otherwise great maps for me. Luckily the less fun parts stopped right there and then.

The rest is magnificient, not far behind Leptis Magna as far as greatness goes. The map is absolutely beautiful, huge, full of enemies and secrets, and extremely varied. Thank you so much for this map Heresy!

Fixed the sound issue with "ln -s" to make a symbolic link. Thanks for the help.

^ i am an idiot, was using previous quakespasm version.

Those rock textures really help with the complexity of the cliff faces while requiring only simple shapes.

It's a pity that this Dark Jewel has not received its "official" portal in new Arcane Dimensions 1.8!

Wow, what a map. Thick atmosphere, gorgeous evil flair, perfect sounds and the gameplay was lots of fun too.

This map should be in arcane dimensions

Brilliant map, certainly the best 'non official' arcane dimensions map - and, as other commenters have said - absolutely deserving of its own portal in Arcane Dimensions.

My only slight niggle is the use of LOTR art which takes me out of the 'Quakeverse' somewhat - I ended up using some concept art of Cthon run through an AI tool instead for my textures: https://storage.googleapis.com/nightcafe-creator.appspot.com/jobs/u2esboDaxD9yuUD4Lj6j/u2esboDaxD9yuUD4Lj6j.jpg

Visuals are gorgeous, and gameplay is varied and challenging without becoming a slog. Great bossfight too.

Obviously gorgeous, but I think the other big AD maps outclass it in terms of gameplay. Partly due to the sometimes unintuitive, timewasting puzzles.

Not a fan of the bossfight either. The way you deal with the Chthon is just weird, find a safe spot and snipe the windows with the RL, ok, whatever, sniping was always my favorite part of Quake, gg... The monsters summoned after Chthon is "defeated" were merely perfunctory.

Don't mean to be too negative, it's a great map, just not a personal fave.

That was easily in my top 5 maps.

Can we have an updated version which runs with AD 1.81?

Expectations were high, but I was not let down.

'Oxyblack Fortress' ['Heresy 1'] is brilliant. It is brilliant in terms of spatial design. It is climatic. It is picturesque. It does reinforce the effect with literary, mythological references. The custom soundscape elements, as well as the soundtrack, are incredible. The map is also difficult - the latter, is to be compared against 'Heresy 5' and 'Heresy 2' maps of the same author, in which case, the 'Heresy 1', remarks a significant difference; one for the benefit, in my opinion.

What particularly strikes as well done from the early game on, is the lighting - it properly emphasizes the available technology of modern 'Quake' sourceports. Careful application of 'Arcane Dimensions' assets, brings an entire new feeling to the game; one that is grave, eerie and glorious at the same time. Things blend together well, thanks to the tasteful design choices. Owing to the introduction of hazardous platforming elements, combined with the dynamic 'Quake' combat; the difficulty impression of the map - as already remarked - has become notable.

Even though I loved the Cthon motiff during the early game - bringing wonderful cognitive dissonance to the original 'Quake' veterans - I have to point out that this tidbit is misleading. There are two Cthon entities appearing throughout the continuum of the map; one destructible via conventional weaponry, the other - not. I do count that discrepancy as a lack of consistency in presentation; an error of a false clue. For the other encounter - tricky with those windows indeed, but that - is a matter of puzzle; which there are few in the 'Oxyblack Fortress', most of them at least of good enough quality.

For the technical note, sparsely I have encountered issues with spiders spawning beyond playable thresholds, such as in lava under the grid-floor surface or stuck to the ceiling.

Finally, it would be good to give an instruction that the ladders are climbable through "jump" button activation in the proximity of one.

Altogether, a piece of a legend.

This was really a top-notch map in every regard. The gameplay was fresh and interesting and figuring out how to work the puzzles was half the fun. I'm not a huge puzzle fan and fortunately, this didn't cross the line. After all, I'm really only here to blow things up and turn monsters into gooey, dripping gibs.

The end was different and refreshing. There's plenty of replay value here!

Lighting, architecture and texturing was also spot on.

And I'd be remiss if I didn't thank Markie Music for the fantastic audio!

IMO. this level has won a place in my top ten all-time favorites. Thanks, Heresy!

I wish this map (heresp2 too in fact) would be included to some Arcane Dimensions update like 1.9. It deserves to be noticed by wider audience. THANK YOU dear sir Heresy. You made my day (evening actually)

A bit disjointed but still good map, however, only as an exploration and puzzle solving. Lots of invisible wall bugs, especially on the cliffs. Could have used the excess space in the high towers as to expand the map.

This level is a string of good beatdowns in Sauron's actual castle in Mordor that had been left out from The Lord of the Rings. It looks real good. I haven't seen these textures before, and the black stone and lava that cover the place look delightful.

It abounds with arena fights which should make any appreciator happy. The terrain is often hard to walk on with too many sharp edges that won't allow for smooth traversal. That comes to bite at the last area, where the steps most fighting will be done on are easy to fall from, and there are "fire spectres" (I don't know what these are called) without much cover. There is a lack of safe terrain here, but it is nothing too difficult.

Awesome map, no doubt about it, but the gameplay could be much better. Some puzzles are a bit irrelevant which leads to too much platforming (not bad per se, but not quake like). Also it is a bit linear, hence predictable. Some bosses are leveled down too much and feel easy to kill.

Nut again, the visuals, level design and creativity overall are mind blowing and clearly there is a lot of superb talent behind this one. Well done.