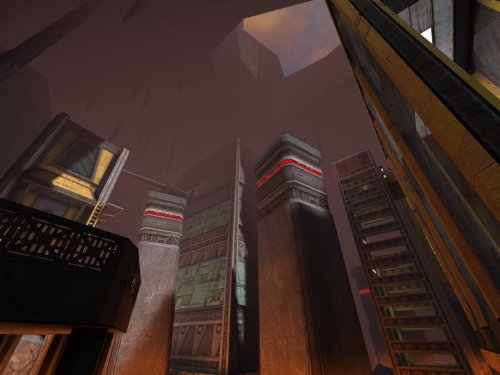 Large sci-fi base map with Makkon textures, made for Alkaline v1.1+ (NOT included). Custom music is "Flow" by Anna Centauri. This is version 1.1 which adds more details, bug fixes, and encounters.

"I started this level a month into learning how to map, and spent the next 8 months tweaking and improving it as I learned the ropes. This means that it might have some nice ideas, but it's poorly optimized for slower systems and has a few design issues. But overall, I feel pretty good about the end result.

For the design, I based it on the Dark Souls 2 DLC Crown of the Sunken King, but sci-fi instead of fantasy. If I follow through on the original plan, this will be level 2 of a 5-level episode. That may or may not happen. If people like this enough, I'll at least make a second map for the temple itself."

This was really good. Longer than I typically like but that's just personal preference.

Everything flowed really nicely, a lot of good shortcuts, the level looping back around on itself, etc. Only issue was some hard to see buttons that blended in too well with computer consoles around them. Found plenty of things that seemed like secrets but they didn't count as secrets. Of the actual 6, I didn't find a single one. Also missed something like 15 monsters, I imagine they were in secret areas I didn't get to.

Played in Quakespasm, and there was some definite choppiness in the fraterate lol. That and some z-fighting textures were the only real flaws, otherwise well done.

Hm. I'm not sure this quite qualifies as a 'first map' - another map was released in the Speedmapping series. (Munble, mumble, grumble...)

But, if this is a learning map, the author has certainly learned how to debug properly! ;) This is a very good map, i am impressed with the architecture, the general quality of the mapping - and all the fun and new ideas that show up everywhere!

I really like this. Thanks for the efforts, and thanks for sharing!

Really cool! I liked the use of colors, and fighting through windows. For criticism, some fights made it a little too easy to kite enemies one at a time through a door, and I had trouble getting rid of vore balls in one fight.